Death by Water by Kerry Greenwood 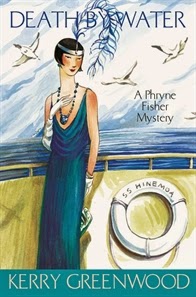 For some fun, light entertainment Kerry Greenwood's series of 1920s mystery novels featuring private detective, Phryne Fisher are hard to beat. In Death by Water Phryne and her companion, Dot are cruising around New Zealand on the Hinemoa, a luxury cruise ship - their mission: to uncover a jewel thief. Why am I slightly reminded of Dame Edna Everage and her side-kick Madge? It might be the contrast between the flamboyant employer and her quiet, dowdy companion. Or it might be their Melbourne provenance. Anyway there are no gladioli here nor diamante spectacles. Phryne is far to sophisticated for that.
And boy does she know her classics and Lalique. She's quite a match for the informative Navigation Officer Green who is given the task to show her round the impressively appointed ship and apprise her of the job at hand. He is utterly smitten of course, as Phryne is beautiful too, in that dainty, flapper kind of way, as well as smart and at times scarily frank about her sexuality.
Anyway in this story we have the classic whodunit set up of a group of people confined in one setting who each have opportunity to commit the crime. They all happen to be conveniently seated at Table Three for meals in the first class dining room. Dot is of course travelling second class and gets to know the maids and shipboard attendants and all the gossip they provide.
Table Three has quite a diverse bunch of characters: Professor Applegate is a kind of New Zealand Margaret Meads, which is handy for background detail as she knows all about the Maori and early New Zealand history. Albert Forrester is a photographer who takes pictures of the female form. Enough said! Mr West is grumpily middle aged with a young flirty wife. Mr and Mrs Cahill are retired farmers from the outback. Tetchy Mr Singer suffers from dyspepsia and bullies his wife. Jack Mason is a lively young man desperate to avoid a career in law, which is his father's wish. Marjory Lemmon is accompanying her elderly uncle Vivian Aubrey, both ex British raj.
And we mustn't forget the all-female band, Mavis and the Melody Makers, who for some reason nobody likes, although they know their stuff when it comes to dance music. Phryne dangles a carrot for the thief in the form of a large, lustrous sapphire, with a supposed provenance from an Indian temple - all quite fake, and the action slowly begins.
The reader can't but wonder, however, when the murder will take place - the book isn't called Death by Water for nothing - and some might be disappointed that it takes quite some time - at least three quarters of the book. What a blood-thirsty bunch we mystery readers are!
But with a Phryne Fisher novel like this, it's really all about the journey - and I mean that literally as well as figuratively - because there is so much to enjoy. The writing is crisp and engaging and Miss Fisher always entertaining. And there's quite enough going on with blackmail, Mickey Finns, shipboard romance and infidelity, attempted murder as well as the real thing, and the general marvellousness of the luxury cruise ship setting.
All this is coloured by the 1920s era which Greenwood has got off pat. It's a bit like a sex-ed up Dorothy L Sayers and as such Greenwood has carved out a niche all her own. There are twenty Phryne Fisher novels, and they make a great stand-by rainy day read as they never disappoint. Her bio on Fantastic Fiction is, by the way, the best I've come across.