Jane and Prudence by Barbara Pym 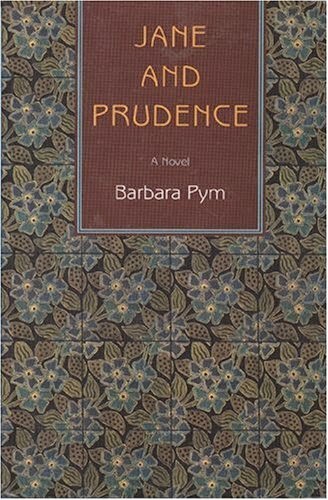 Pym is often described as a 20th century Jane Austen. Perhaps this is more obvious in Jane and Prudence as the eponymous Jane sees herself as a bit of matchmaker. Although she doesn't quite get into as much trouble as Austen's Emma does, and as Pym puts it when describing the modern novel, the ending is not obviously a happy one, with a number of possibilities still on the table.
The story begins with Jane and Prudence, who were at university together, at an Oxford reunion. Here their old tutor, Miss Birkenshaw, remarks about what her students have gone on to achieve. A number, like Jane, have married clergymen, others have their work in a ministry or have dogs, while a question mark hovers Prudence. Jane feels Miss Birkenshaw might have said that Prudence has her love affairs.
As she and her husband settle into a new parish, Jane begins to look around for a suitable husband for Prudence, now twenty-nine - an age when she could so easily miss the marriage boat altogether.
Prudence meanwhile lives in a tastefully decorated flat in London, where she works as an assistant for a Dr Grampion, editing books 'nobody could be expected to read'. She has secretly been in love with her employer who one evening when they were working late, had laid a hand on hers and said, 'Ah, Prudence.'
Pym creates amusing little scenes around Prudence's workplace, where the older ladies, Miss Clothier and Miss Trapnell, fuss about whether the typists will manage to bring in the tea on time, or if Mr Manifold can be prevailed upon to share some of his tin of Nescafe when the tea has run out. This is the early fifties and rationing is still the bane of everyone's existence.
Similarly in Jane's village, there is always the worry of what to have for dinner, Jane usually relying on opening a tin, but rescued by the wonderful Mrs Glaze, the housekeeper whose nephew is the village butcher. Mrs Glaze consequently knows whose turn it is for liver, and who will be having 'a casserole of hearts' that evening.
The scene is set for plenty of humour as Jane lines up potential candidates for when Prudence comes to stay, lured by a fundraising whist drive. The most obvious seems to be the recently widowed Fabian Driver, who has had a few love affairs himself but has a nice house on the green. There is also young Mr Oliver who looks palely interesting when reading the lesson, and the local MP, Edward Lyall. So many possibilities.
It could all be a bit silly if it weren't for Pym's wit and the lively dialogue that captures the time; the daft preoccupations of parish life, starkly contrasting with quotations from Jane's academic speciality: the poetry of the seventeenth century.  Contrast gives the book a bit of oomph in many ways - the two main characters, one from the town and one from the country - and the contrast between people's expectations and what transpires. Jane and Prudence is a delightful read, redolent with subtle wisdom, that will leave you in a better place.