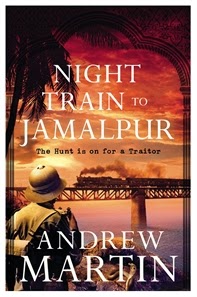 Andrew Martin might well have called this novel 'Snakes on a Train'. His railway detective, Jim Stringer, has been sent to Calcutta  to investigate corruption and security arrangements on the East Indian Railway. It is 1923 and with Lydia and their sixteen year old daughter Bernadette in tow, his secondment was supposed to be a kind of working holiday.
But someone has been secreting venomous snakes in first class carriages and the body count begins to climb. Jim feels that this should be something he could look into, and of course he does, hampered as he is by fellow investigator, the cigar smoking and monstrously rude, Major Fisher. The two are on the night train of the title, when a murder takes place - Jim rudely awakened by sounds outside his compartment and then gunshot.
The Anglo Indian, John Young, with whom Stringer had been chatting and sharing an evening drink just hours before, is found dead while horsemen ride off into the night. It is difficult to suggest a motive for the killing unless Jim himself is the target, a means of stalling any investigations into railway corruption.
And Jim can only wonder who has stolen the folder of potentially damning information that had arrived on his desk the day before. If only he'd had the chance to read it first. Jim is inclined to suspect Fisher, who is uncooperative and who he believes is carrying a gun, which for some reason fails to appear when their carriage is searched by police.
If that isn't enough to be going on with, Jim begins to worry that his daughter Bernadette is about to be swept off her feet by the son of a Maharajah, known to the family as the RK. On top of this Bernadette is out almost every night dancing with her posher pals and spending small fortunes on hats. Meanwhile Jim's wife, Lydia, is eager to spread the word about the women's movement in India at a time when revolution is in the air. But Jim worries that there is something else niggling her.
Jim's investigations take him from balls held by Anglo high society and golfing with the RK to clandestine meetings with snake charmers. There is a host of potential suspects, most of them peculiar in some way - the strangely faceless William Asquith in charge of the traffic department who spends more than he could possible earn,  his subordinate Dougie Poole, who has a brilliant mind hidden by his tendency to be off his face most of the time, as well as Professor Hedley Fleming who knows an inordinate amount about snakes, to name but three.
While this novel isn't as pacy as some Jim Stringer novels, there is a lot going on and enough action to keep the reader well amused. And laced through everything is Jim's knack for wry observations and local colour. The India situation in itself is interesting, with whisperings about that upstart, Gandhi while Lydia has plenty to say about British colonial domination.
Night Train to Jamalpur is the last in the Jim Stringer series to date, its author seemingly beavering away on other projects. We've seen Jim delve into all manner of cases in a range of interesting settings. Will there be more in the series? I certainly hope so as this is probably my favourite current mystery series - where it doesn't really matter 'whodunit', as the story is all in the telling. Which is just as it should be.
Posted by Caught Up in a Book at 01:30