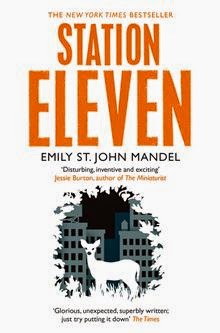 Station Eleven is one of the more original novels I've read in some time. It describes a world where a deadly flu virus has killed more than ninety-nine per cent of the Earth's population. But this isn't a simple dystopian/survival novel, although it has elements of that. It's also somewhat 'six degrees of separation' as it follows the lives of several people caught up in events on the last day before the flu wreaked havoc.
And it all begins on stage at the Elgin Theatre in Toronto with the Act Four death of Arthur Leander due to cardiac arrest. Although Arthur will not be around for the 'end of the world as we know it' that follows, he is the character that connects the others, one way or another.
Leaping on stage to give CPR, is Jeevan Chaudhary, a trainee paramedic. Jeevan was at one time a paparazzo who stalked Leander, one of the most celebrated actors of his day and with a gossip-worthy social life. It is through Jeevan, that the reader gets to take in the dawning horror of the pandemic, the panic hoarding of groceries, the final decision to abandon the city in an attempt to survive.
Also on stage is child actor, Kirsten Raymonde, who is still playing Shakespeare twenty years later with a travelling orchestra. The world has altered enormously, people preferring to live in small settlements, some ruled by fear or menace, to protect themselves from marauding bandits. The players are armed with crossbows and Kirsten carries several knives at her belt, which she has learned to throw with deadly accuracy.
The novel switches back and forth between the nail-biting future and a more decadent past, centred on our famous actor, introducing more characters who will somehow play a role in what transpires later on. One of these is Arthur's first wife, Miranda, who works for a shipping company, and spends her free hours creating a richly imagined alternative world called Station Eleven, in the form of intricately drawn graphic novels.
Kirsten has a couple of copies, much read and dog-eared, to go with her small collection of memorabilia - the press cuttings featuring Leander, and the snow-globe she has carried in her backpack since that fateful night in Toronto. But she isn't the only one who harkens back to the past. The players find Shakespeare relevant to the new world they finds themselves in, and their motto: Survival is Insufficient, is a quotation from Star Trek.
The story moves on in this zig-zag manner throwing up more connections between the characters as the orchestra, escaping from a cult leader and his team of thugs, converges on a disused airport. This is the home to one of the larger communities of survivors, and here Mandel has created a brilliantly atmospheric setting. It is good to know that if you find yourself in an airport when civilisation comes to an end, there is a lot of useful stuff on hand.
Station Eleven is a wonderful book in which you can completely immerse yourself, combining the page-turning action of a survival story with complex characters and thoughts on nostalgia and celebrity culture. It is, not surprisingly, another of the novels I have read recently that have made the long-list of the Baileys Women's Prize for Fiction - the short-list will be announced in a few days.