The Song of Achilles by Madeline Miller 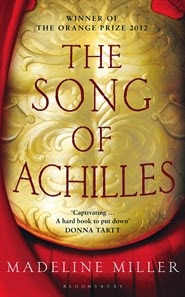 Madeline Miller’s Orange Prize winning novel is both a love story and a war story. And whoever said 'all's fair in love and war' couldn't have come up with a better story to illustrate the point, complicated as it is by the hand of fate and the capriciousness of the gods.
While this is definitely the story of Achilles - immortalised by Homer as the greatest Greek warrior of his day and a key figure in the war the Greeks waged on Troy - the story is told from the point of view of Patroclus and includes a fascinating retelling of the lengthy siege the Greeks inflicted on Troy.

You will remember it all began when Helen was abducted by Paris; she was his prize for choosing Aphrodite in a beauty contest. Helen was the ‘face that launched a thousand ships’ as well we know, and they were Greek warships brought from numerous Greek kingdoms, all converging on Troy to regain not only Helen for her husband Menelaus, but to defend Greek honour and teach the Trojans a lesson.
At first I had to get over my recollections of the movie Troy which cast Brad Pitt as Achilles - an alpha male Holywood idol kind of Achilles. Miller’s Achilles is not like that. With the goddess, Thetis, for a mother, this hero has amazing fighting skills that always find their mark. But he's also sensitive and musical and his unusual golden hair and green eyes give him an ethereal beauty. She takes us back to Achilles' youth and the development of his love for Patroclus, his boyhood friend and lover, which plays an important part in his fate at Troy.
Patroclus has had a difficult start in life. He is a disappointment to his father and when he accidentally kills another boy, is exiled to Phthia where its king, Peleus, fosters a number of boys, one of whom will eventually be chosen as companion for his son, Achilles. Surprisingly to everyone, Achilles chooses Patroclus. When Patroclus joins Achilles for lessons with the centaur Chiron, he begins to get over his inferiority complex and develops skills of his own.
The two become inseparable, but when the war on Troy is declared, Achilles, in spite of Thetis' efforts to hide him, must muster an army from Phthia and join the fleet. Patroclus of course goes with him. Achilles lives under the curse of all that makes him great and his fate, as written by the gods, cannot be avoided.
Miller is a classical scholar and has done her research to make this so much more than a sword and sandals drama. The relationship Patroclus has with Achilles is tender and makes the story poignant and real. She does wonders showing how the efforts of man to create his own destiny are in constant battle with the whims of the gods, which may have seemed strained and artificial in less skilled hands. The power play that develops between Achilles and Menelaus' brother, Agamemnon, who is proud and cruel, makes the story hum along.
You can see the lasting appeal of these classical stories written so long ago by Homer and others such as Virgil and Aeschylus. There is plenty of fodder here for some more classical adaptations - the genial but wily Odysseus, for instance, would make a terrific subject for another book, to say nothing of what happens next to the family of Agamemnon.
In the acknowledgements, Miller states that this novel has been a work in progress for ten years. I sincerely hope that she has learned to speed up the process, because I would love to see some more of these stories brought to life as she has so vividly with The Song of Achilles. This is a haunting story that will stay with this reader for a long time.