Waiting for Sunrise by William Boyd 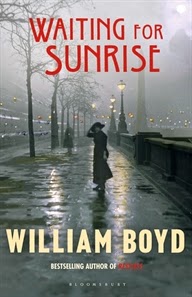 It's a few more months before Robert Goddard's third book in his James Maxted trilogy comes out, and fancying some period spy drama I couldn't resist picking up Waiting for Sunrise by William Boyd. And it certainly didn't disappoint when it came to page-turning action.
Lysander Rief is an actor - with a name like that what else would he be? - and we first encounter him on his way to an appointment with a psychologist to discuss a problem of a sexual nature. This is 1913 in Vienna, a city Freud has put on the map for the development of psychoanalysis. In the waiting room Rief meets Hetty Bull, a compelling young English sculptor, and his life is never the same again. Rief manages to solve one problem, but it is soon replaced by another.
When Rief finds himself under arrest, he turns for help to Alwyn Monro, another client of Rief's analyst. Munro happens to work at the British consulate and manages to help Rief get home safely but at a price. Back in Blighty, Rief takes up his acting profession again, but World War One gives him a chance to pay back that debt that has been hanging over his head since Vienna.
With his excellent French and German - Rief's mother is Austrian - and his ability to assume a role and dramatically change his appearance, Rief is ideal for a spot of espionage when secret information about troop and supply movements at the front is being passed to the Germans. He must make contact with the known receiver of the stolen information and somehow extract the key to the code from him. He does this with a novel method that might well put you off visiting your dentist.
But that is only half the problem; back in England, someone is sending the information on, classified information that only high-ranking officers have access to. Fortunately for the reader Rief is soon installed in The Directorate of Movements on some pretext or other and gets to finish the job off.
There's a lot going on in Rief's personal life as well. He has been engaged to lovely fellow actor, Blanche, but he can't forget Hetty and suddenly his current leading lady has begun to give him the come-hither look. All in all there is certainly plenty happening in the plot to keep the reader amused. Add to that the atmosphere of pre-war Vienna and mid-war England, the theatre set and tea and biscuits in the war office and you can certainly feel transported to another time and place.
And if Rief isn't particularly likeable - he's foolish with women, and has got away with things that he should feel well ashamed of - he's interesting fodder from a psychological point of view. His very faults are what give the story a bit of heft and allow for fate to play with him - a little like his Shakespearean namesake. In the end Rief gets the job done and manages to select the woman he wants to spend his life with, but will he really be happy?
Boyd has made a name for himself as a top-notch storyteller with even a James Bond title to his name. This is the first William Boyd novel that I have read and it is certainly diverting enough in that classic style of storytelling - a modern John Buchan perhaps. I'm still looking forward to the new James Maxted book though.