The Kindness by Polly Samson 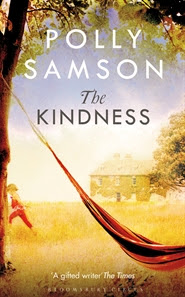 I enjoyed Polly Samson's recent novel, The Kindness, more than I expected - it's one of those books where you just have to keep reading to find out what really happened. It is largely the story of Julian, a young English literature student whose life is never the same after he bumps into Julia, a married woman about ten years older than he is.
Julian can't take her eyes off Julia because she is strikingly beautiful and looks terrifically dramatic when he comes across her exercising her husband's hawk who is named, prophetically, Lucifer. Julian has been reading Milton's Paradise Lost, and there are references to Adam and Eve throughout Polly Samson's beguiling novel. The two soon become lovers and Julian discovers he must rescue Julia from a violent marriage.
Although young, Julian is more than up for the task and with a baby on the way he remains positive and energetic because he and Julia are so in love. Beginning a family has its ups and downs, but Julian discovers a talent for rewriting the stories of history using the voices of eye-witness dogs. He is a runaway success at this and when his old family home, Firdaws, comes on the market he decides to risk everything to buy it.
Firdaws really is paradise, but it might just be paradise lost if things don't improve - Julia is hating having to commute to her garden design business in London and then their daughter Mira becomes ill. Her illness creates a turning point and in the story and everything seems to spiral downwards from there.
Around this ill-fated couple Samson has created a cast of characters that tempt and persuade or generally make things difficult for Julian and Julia. These include Karl, the friend who saved Julian's life when he was attacked by wasps and Katie, Julian's ex-girlfriend, suddenly single again when Firdaws is up for sale. Julian's mother Jenna challenges family members to swim the river that runs through the land nearby and wouldn't you know it, the river is home to a snake.
There are forbidden fruit too - figs ripening and attracting more wasps, and oranges grown by Julia in her greenhouses. The fields are lush and reflect the changing seasons but Julia also makes beautiful settings for her family in their London flat. All of this adds loads of atmosphere.
The Kindness is a story about betrayal and misunderstanding where everything hinges on an event that happens early on, with the jumps forward and back in time that have you guessing just enough to keep you reading on. There's even more to wonder about with the similarity of the main characters' names or working out which particular event is the 'kindness' of the title.
I had my doubts about Julia - is she a terrible temptress or is she just as much a victim of bad luck as Julian? With his imaginative talent and boyish passion for love and life, Julian seems to earn more of our sympathy.
But in the end it doesn't much matter what we think of the characters as they seem to be the playthings of bigger things like luck and fate, coincidence and bad-timing wrapped up in a carefully wrought storyline. These components are brought together by the fine writing talent of Samson who has created a unique and intelligent novel.
Posted by Caught Up in a Book at 18:41