A God in Ruins by Kate Atkinson 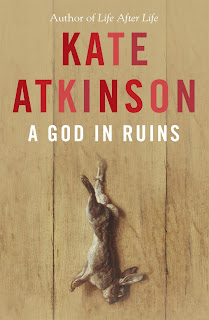 A God in Ruins is an intense, powerful novel written by quite possibly my favourite author writing today. The title is a quotation from Ralph Waldo Emerson, who wrote 'A man is a god in ruins ...' and the man at the heart of this book is Teddy Todd, the brother of Ursula, the central character of Atkinson's previous novel, Life After Life. While the earlier book describes Ursula's war, and particularly the Blitz, Teddy's war makes him a Squadron Leader flying Halifax bombers as part of Bomber Harris's campaign to bring Germany to its knees.
While Teddy's war in the Air Force is a central part of the novel, we get a lot more of his life too: his childhood at Fox Corner, his boyhood devotion to Nancy next door, who becomes his wife after the war, and their life together. The story cuts from early years about Teddy to later years when he is very old from the point of view of several other characters, such as his grandchildren, poor mixed up Sunny who can never please his mother, and sensible Bertie who refused to be called by her first name, Moon, taking her middle name of Roberta instead. You can tell her parents were living on a commune when she was born.
Atkinson is really good at ghastly characters and who could be more unsympathetic than Teddy and Nancy's daughter, Viola (surely she should be called Vile for short). But she's also complex and interesting and there is a very good reason for her inability to find love in her life or please the reader. This reason is complex and to do with the death of her mother, and the reader will have to wait until the end of the book to truly understand her.
Teddy is a masterstroke of a character however, because he contrives to be immensely sympathetic,  as well as multi-faceted. He strives always to do the right thing - part of a pact he made with God for surviving the war, when the attrition rate for bomber crews was horrendous. His goodness doesn't make him boring, as he is often hamstrung by decision making and doesn't quite understand the people closest to him when he needs to. He has a comfortable marriage but at times it's a lonely one - his wife and daughter so close to each other he can sometimes feel a bit left out.
But the heart of the novel is Teddy's war. Atkinson has done a ton of research to capture the scenes of the bombing raids Teddy and crew undertake. There are the characters of the different men and their roles - the navigator, the gunners, the wireless operator and bomb aimer - their quirks and personalities and what happens to each of them during the different missions. It is all vividly brought to life with nail-biting action. You feel for each loss as various men are killed while Teddy survives and you sympathise with his grief.
And if that wasn't enough, there is Atkinson's marvellous prose - her writing is always witty and sharp and there is never a dull sentence, never any padding. The book is another triumph, and surely a contender among the literary awards for 2015.
Posted by Caught Up in a Book at 01:00