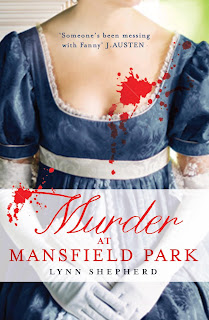 Lynn Shepherd's first foray into mystery fiction inspired by nineteenth century literature reads very like a Jane Austen novel. One of the first things you notice is the pains she has taken to sprinkle through the book occasional outmoded usages - words such as sopha (sofa) and twelvemonth (a year), to name but two. The first half of the book is a bit like a reworking of Austen's Mansfield Park, with an overhaul of the characters.
Most notable of these is Fanny Price, whom Kingsley Amis described as 'a monster of complacency and pride, who under a cloak of cringing self-abasement, dominates and gives meaning to the novel'. Here Fanny is an heiress, with an immense fortune when she comes of age and her pick of suitors. You would think this would make her happy. She's nice looking, has nice things to wear and balls to go to, but all that entitlement seems to have turned her into quite the calculating shrew.
Fanny's aunt, Mrs Norris, has pushed forward her stepson, Edmund, as Fanny's suitor and the two are informally engaged, but neither seem terribly happy about that. Mrs Norris is snooty or fawning depending on who she is talking to, and the Bertrams whose seat is Mansfield Park are pleasant but not very smart. Sir Thomas and Lady Bertram think Fanny demure and generally lovely, but when Mr Rushworth, a character for whom the term popinjay seems to have been invented, starts paying court to Fanny, her true colours begin to emerge.
Much of the story is told from the point of view of Mary Crawford, who is staying with her sister, the vicar's wife, along with her brother, Henry, who has been contracted by Sir Thomas to redesign the gardens of Mansfield Park. Mary is attractive, kindly and sensible in equal proportions and soon makes friends with young Julia Bertram while catching the eye of Edmund.
The novel could quite happily carry along in this vein, a comedy of manners with a bit of social commentary and romance on the side. There's plenty of goings on and intrigue when it comes to who might marry whom. But in the middle of the book Shepherd throws in a murder and the novel takes a darker turn. The Bertrams engage the services of 'thief-taker' Charles Maddox, who you might recall is the uncle of Shepherd's private investigator from her later books, also a Charles Maddox. The older Maddox is uncompromising, stopping at nothing to get to the truth, and suddenly the book has a distinctly different tone.
Murder at Mansfield Park is another terrific read from Lynn Shepherd - well researched and cleverly plotted. Her characters are multidimensional too. There's nothing like throwing a murder at them to see who shines and who turns into a quivering mess. But what I like best about her books is Shepherd's impeccable writing which so perfectly captures a sense of period, plus a wry Jane Austen humour. She writes the kind of book that is both a lot of fun and remarkably intelligent - is that why so many literary authors are turning to mystery writing?
Posted by Caught Up in a Book at 19:15