In a Real Life by Chris Killen 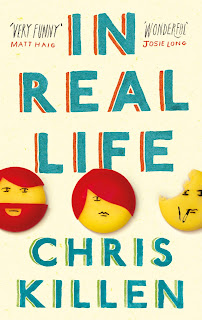 In a Real Life is the story of three characters, Lauren, Paul and Ian over two time periods: 2004 and 2014. The novel cuts back and forth between these two critical years, using a lively mix of alternating view points, past and present tense and first and third person narration. The chapters are short so in no time you are swept into the novel which opens with the break-up of Paul and Lauren This happens when Lauren goes to bed having left a list of PRO's and CON's about Paul on the living room table, which of course he happens to see when he comes home from his bar job.
His bar job is one of the CON's - there are seven in total - while there is only one PRO: that he would never cheat on her. Fast forward to 2014 and there's Paul, having published a novel, teaching creative writing, so no longer working in a bar, but contemplating infidelity with a nineteen year old student, which means he seems to have swapped around some of his good points and bad points.
Lauren goes off to Canada on the spur of the moment, but begins an email correspondence with Ian, Paul's flatmate. Ian is in the music industry, playing in a band, writing songs, but by 2014 he has lost his job in a record store and has to move in with his more successful sister, Carol. It's a crumby box room and he has to sell his guitar to pay his board. He's also lost touch with Lauren, after a stream of emails that promised more than friendship. All three characters seem to have lost touch, in fact.
By 2014 Lauren is working in a charity shop, still looking for Mr Right with little hope of finding him. The course of the novel fills in a few of the gaps: what caused the falling out between Lauren and Ian for starters. We have sympathy for Ian in particular: he seems a nice guy but his life has struck rock bottom, Lauren has a knack for getting into situations with men without really thinking them through, while Paul seems to be acting out a role in 'Men Behaving Badly'. It is a toss-up who is worse, Paul or Carol's boyfriend, Martin who gives Ian a job in telemarketing. This is a particularly unpleasant industry and it says a lot for Ian that he is so bad at it.
The novel highlights the way we communicate/fail to communicate using social media and the Internet, and is an interesting snapshot of Generation Y. There is plenty of humour in the little messes each character gets into, although at times this made me cringe, particularly Paul's hopeless acts of deceit towards his girlfriend, his younger lover, his boss and even his publisher. And surely characters like Paul and Ian should steer clear of Facebook or at least should think rather than drink before posting a status.
What kept me going with the story was the obvious 'unfinished business' between Ian and Lauren that lurks in the background. Paul shows a willingness to make amends to all and sundry, but seems to be hellbent on picking up more bad points than before. In Paul, Killen has created a classic example of literary pretentiousness reminding me somehow of that Groucho Marx saying: 'Practically everybody in New York has half a mind to write a book - and does.' I am glad however that Chris Killen wrote this book - it is so refreshingly honest and good fun.
Posted by Caught Up in a Book at 19:48