The Household Spirit by Tod Wodicka 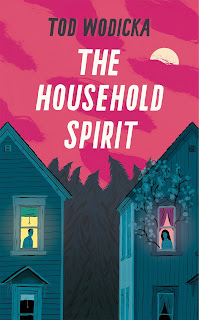 The Household Spirit is a story about neighbours - two very different neighbours, each with a peculiar problem. Fifty-year-old Howie Jeffries lives next door to Emily Phane on Route 29 in New York State - two solitary houses adrift on a road on the way from somewhere to somewhere else and not in itself a destination.
The Phanes and the Jeffries have never been neighbourly in all the thirty odd years Howie has lived there. His wife's baking was rebuffed when the Jeffries first moved in, and the Phanes' odd household, an elderly couple that didn't get on, and then old Peter Phane on his own bringing up his granddaughter, has long been a source of speculation.
Howie's solitude is disturbed when Emily Phane returns from her studies in Boston to nurse her dying Peppy, and after his death is unable to return to her former life. Emily has a night-time affliction, a sleeping paralysis which brings her disturbing visions from which she is unable to wake.
She drifts through her days, filling her house with plants, losing weight and looking unkempt. When Howie rescues her after she sets fire to her house, he finds he can help her with her problem, while Emily helps him with his.
Born with a face described by his ex-wife as 'the last face on earth', Howie had learned early on that his smile could make children cry, the kind of face not uncommon on a Nazi war criminal. As a result he has always been extremely shy, living a quiet life doing shift work for the local water company. Divorced for twenty years and only in occasional contact with his ferocious artist daughter, he spends a lot of his spare time fishing and dreaming about the sailboat he will buy one day.
This could seem a quirky feel-good novel about two awkward characters, but Widicka's lively dialogue and original storyline add a ton of drama. There's a cast of interesting characters: Peter Phane who was in his day a well-respected journalist and has a string of elderly girl-friends; Harriet Jeffries the daughter Howie accidentally took to a Maroon 5 concert; Ethan, Emily's sort-of Korean, but not really, boyfriend, a solid brick of a bloke who won't ever let her down. There are plenty more.
Wodicka's prose adapts cleverly to capture his characters - the youngsters' tone is hip New York with interesting use of social media; Howie is so little used to talking to people he makes up his own idioms that sit oddly on the page by comparison. As he opens up to people, his conversation slowly becomes more natural.
The story builds to a curious denouement in a snowed in New York City which can be read more than one way or perhaps it is just a little to clever for me. Anyway I recommend any reader to make up their own mind about the ending, which is like the novel as a whole, utterly original and thought-provoking.
Posted by Caught Up in a Book at 20:05