The Information Officer by Mark Mills 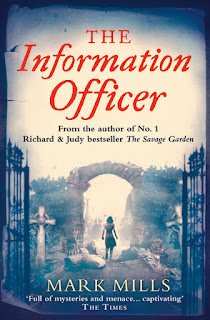 You could easily pass off The Information Officer as just another pacy World War Two thriller. It has all the standard requirements. First off we have a young, intelligent investigator in the form of Max Chadwick. Max's step-mother has supposedly got him a cushy number for the duration, handling press releases for the military on the isle of Malta. It's propaganda really, aimed at maintaining morale and good relations with the islanders. As it happens it hasn't turned out to be such a safe billet with Malta the target of an ongoing bombing campaign by the enemy, which only adds to the suspense.
Next there's an evil malefactor at large - in this case a rapist/murderer is stalking sherry queens, the women who work in the bars in an area known as the Gut. His previous killings have looked like accidents, with nothing to suggest a connection between them. But the most recent girl has bled to death from a wound that could have been caused by ack-ack shrapnel, or was it made to look that way?
Max's doctor friend, Freddie, is alarmed when the latest victim is found with vestiges of a submarine officer's uniform clutched in her hand, and calls in Max to investigate. With relations between the British forces and the Islanders fragile at best, Max will have to move swiftly to find the killer before the details leak out and cause even more resentment.
And of course it wouldn't be your classic thriller without a love interest for the hero. Max has a couple of options here. First off there's Mitzi, stuck in a loveless marriage with Lionel, an officer in the submarine corps. Mitzi works tirelessly for a service sorting the affects of dead RAF personnel, packaging them up for their families and writing heartfelt letters to accompany them.
Then there's Lilian, half Maltese and half English, who is as smart as she is beautiful. Her job as deputy editor of a local newspaper brings her in contact with Max and the two are good friends.
Max zips around the island on his motorbike and his easy manner means he has many acquaintances, some of whom are suspects. Lionel is a possibility if only because he wears the right kind of uniform and taking him out of the equation would free up Mitzi for Max, or is this too obvious a plot twist? Questions also hover over Elliott, an American pilot, temporarily grounded after an accident.
Meanwhile the reader is treated to snippets of the perpetrator's own story through his eyes which are chilling and fortunately brief. It is all fairly classic stuff except Mills is a better than average writer. He captures the snappy dialogue of servicemen desperately keeping chipper while the Germans give them more than they can possibly return. The characters and camaraderie are all vividly brought to life, while the plot builds up to a terrific showdown as history is made in the air above.
But what I really enjoyed was the picture Mills creates of Malta - an island with a long tradition of being under siege. With its distinctive architecture, amazing harbours and sunny Mediterranean ambiance - it is as much of a character in the book as Max.