This Thing of Darkness by Harry Bingham 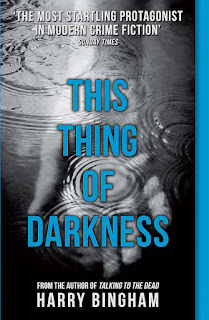 I'm not sure I've ever read a crime thriller set in Wales before, but This Thing of Darkness is the perfect introduction. It's a brilliant police procedural and as plots go it has much going for it, including a particularly nasty bunch of crims who are determined to make a lot of money and don't care what they have to do to anyone in their way. There's plenty of danger for its plucky detective, including being abducted and interrogated with a picana and going under cover as a ship's cook. Then there's some exciting stuff to do with rock climbing and a spider-man sort of criminal nick-named Stonemonkey.
But what really grabs you is the main character. DC Fiona Griffiths suffers from something called Cotard's Syndrome, a mental disorder that can cause depression and a kind of psychosis which leads sufferers to believe they are dead. Maybe this is why Fiona is quite relaxed about throwing herself into dangerous situations.
We first come across the detective having time off to study for her sergeant's exam. Her attention becomes riveted on a couple of cold cases: the death by accident or suicide of a security guard who had fallen from a steep cliff on his way home; and the seemingly impossible burglary of some art - how did the burglars manage to break in through the top storey?
Fiona spots a connection to do with a dodgy insurance company run by one Galton Evans, who is as slimy as he is crooked. It is his ex-wife's home that was burgled and as the art was returned, it doesn't seem like a major crime, but Fiona smells a rat. She has a knack for reinspecting crime scenes and discovering things her colleagues have missed. Making friends with a handsome climber, she recruits him to check out the possibility of scaling the smooth exterior of the house.
Mike shows how it can be done and gives her a clue to the death of the cliff jumper as well - both suggest the involvement of a top-level climber, soon given the moniker of Stonemonkey. Could there be more cases where fearless climbing was required?
All the while Fiona is meant to be working on something else, which doesn't impress her superior officer, DCI Jackson, who likes to thump the desk a lot and talks in a bass-baritone - very Welsh, in fact. Relegated to working as the exhibits officer of a rape case, Fiona finds a huge amount of forensic evidence but no leads.
But her mind keeps going back to the Stonemonkey case and she enlists the help of ex-cop, Brian Penry, recently released from prison. He's happy to do a bit of surveillance and breaking and entering on Fiona's behalf in the search for evidence.
Bingham assembles a terrific cast of characters in support of his gutsy investigator, all of them well rounded and interesting. But that never slows down the action - there always seems to be another tight corner for Fiona to extricate herself from. The work of the Stonemonkey adds a brilliant bit of plotting and the varied settings - Welsh mountains, central London, a storm-tossed fishing trawler and sunny Spain - all add plenty of atmosphere.
With snappy first-person/present tense narration, you just about inhale this novel. There is so much to enjoy about This Thing of Darkness, I shall be checking out the previous Fiona Griffiths books - Bingham doesn't put a foot wrong.