Dreamers of the Day by Mary Doria Russell 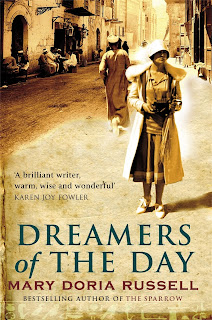 In 1921, larger than life figures in history - including Winston Churchill, Lady Gertrude Bell and T E Lawrence - gathered in Egypt to thrash out the Cairo Peace Treaty, the building blocks for a modern Middle East. It was from here that the nations of Syria, Iraq, Lebanon, Israel and Jordan would come into being following the fall of the Ottoman Empire. Imagine being a fly on the wall when that was happening!
Well, actually, in Mary Doria Russell's Dreamers of the Day, we have a kind of fly on the wall in the form of American spinster Agnes Shanklin. Agnes is forty and has led a sheltered life, at first under the thumb of her mother and then as a primary school teacher in Cleveland, Ohio. When the Spanish flu that followed the First World War robs her of her family, she finds herself bereft. But the need to take care of three estates pulls her back to reality and when she finds herself of independent means, she quits her job and goes shopping.
Slowly her mother's admonishing voice in her head is replaced by shopgirl Mildred, who not only sends her home with the new shorter dresses of the twenties, a bob and a bundle of confidence, she also encourages her to travel. Agnes's destination is the Middle East because her sister and brother-in-law worked at a Christian mission near Beirut, and she has always wanted to see the Nile and the Pyramids.
When she reaches Cairo, both the too-short dresses and her little dog cause mayhem at the hotel she has booked, but T E Lawrence comes to her rescue. When she reveals that he knew her sister, the two become friendly. Next thing you know she's invited to dine with the dignitaries, and Winston Churchill, who admires her North American frankness, invites her to accompany him on a jaunt into the desert where he brandishes his paintbrushes.
She gets chatty with Clementine Churchill and Gertrude Bell and is soon adding her pennyworth about how one country dominating another through colonisation only causes grief for both parties. Lawrence eggs her on and enjoys the stir caused by her no-nonsense opinions.
Agnes also befriends the dashingly handsome German official, Karl Weilbacher, who likes to walk her dog, takes Agnes to the tourist traps and encourages her to tell him all about her encounters with the diplomats. As Agnes becomes more and more besotted with Karl, there are niggling fears that perhaps he is a German spy and is simply using Agnes for political reasons. But Agnes is eager, for once in her life, to live for the moment and throw caution to the winds.
Dreamers of the Day captures a hugely important moment in history through the eyes of an ordinary person. The foibles and peculiarities of historical figures are richly described - Russell notes in her acknowledgements that where possible she has used their very words and there is no doubt the novel is meticulously researched. Agnes is smart and educated enough to give wise and eloquent assessments of these people and their deeds in a way that is both informative and entertaining. This is another terrific read from an author who breathes life into history.