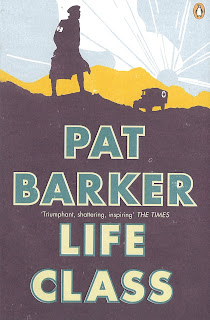 With the release of Noonday, I thought it was about time I caught up with the first title in Pat Barker's second war trilogy, Life Class. It follows the story of talented artist, Elinor Brooke, her friend Kit Neville, a daringly different painter who is making waves on the art scene, and art student, Paul Tarrant. Both young men are drawn to Elinor, but she is cooly stand-offish, leaving Paul to throw himself into an affair with Teresa, an artist model and friend of Elinor's.
Paul is from the north and a less genteel background, though his savvy grandmother was able to fund his schooling and has left him enough money to study art. This is where we find him, at London's Slade art school suffering under the critical eye of life-class teacher, Henry Tonks. Paul has a few good techniques up his sleeve, but his appreciation of human anatomy is hopeless and Tonks wonders why he is wasting his time there.
It is the glorious summer of 1914, but the clouds of war are on the horizon. Dissatisfied with their lives for various reasons both Kit and Paul are desperate to see some action and eventually find themselves in France, Kit doing some war-reporting and Paul as an orderly in a field hospital. Barker really comes into her own recreating the smells, sounds and terrible sights as well as imagining the pain of wounded men being cared for in appalling conditions. There is never enough anaesthetic and the wounds horrific and barely imaginable.
Before leaving London, Paul and Elinor had grown closer, and much of the latter part of the book consists of the letters they write to each other. Elinor refuses to have anything to do with the war effort, much to her parents' disgust, and carries on devoting her time to her painting. Paul is drawing too, but his subject matter is the terrible events he deals with day by day, which are surely unfit for public view. Both in their own ways are struggling with the role of art in the terrible human calamity that is war. There are glimpses of the Bloomsbury Group, described as a bunch of 'conchies', when Elinor becomes friends with Ottoline Morrell.
Barker is a brilliant storyteller, her characters so distinct and intense. I love the way Elinor's point of view is loaded with the visual, and we see the world through her artist's eyes. Not that the language is ever wordy or overly descriptive, leaving the characters to get on with things. Which they do. The story builds, following Elinor's relationship with Paul on one hand, and as the danger of the front intensifies on the other. The question of whether relationships can survive a war that irrecoverably changes those caught up in it will surely be the subject of the next book in the series, Toby's Room, another to add to my 'must read' list.