The Ghost Riders of Ordebec by Fred Vargas 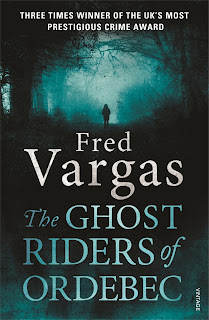 Vargas throws four perplexing mysteries in not so many more pages in the opening chapters of her most recent Commissaire Adamsberg novel. He quickly solves the cause of death of an old woman who had apparently died in her sleep, but a trail of breadcrumbs leads him to suspect her husband of foul play.
Soon after that, he rescues a pigeon, its legs tied together so that it cannot feed itself and looks likely to die. Adamsberg swears he will bring the perpetrator of this petty crime to justice, and takes the bird to Lieutenant Retancourt, his Amazonian subordinate - if she can't cure the bird no one can.
Pacing the pavement distractedly and looking out of place on the streets of Paris, he meets an elderly woman who is too nervous to enter the police department doors. Eventually this Mme Vendermot reveals her peculiar story - that her daughter has seen the Ghost Riders of Ordebec and among them were four doomed men who live in her Normandy town, the first of whom has already disappeared. The local police take her for a madwoman and will not listen, but Adamsberg is fascinated.
If only he hasn't been suddenly called off to investigate the murder of prominent businessman Antoine Clermont-Brasseur, his corpse found in his burnt-out car. The suspicion falls immediately on Momo, a serial arsonist whose petrol soaked sneakers are found on searching his home. But there are others who might want Clermont-Brasseur dead - his two sons are reportedly dissatisfied with his management of the family business and want to take over, yet torching an old man in his car seems a fearful way to go about it.
Momo swears his innocence and Adamsberg, who has a knack for being able to detect if someone is lying, believes him. He masterminds a way for Momo to escape and to allow him to investigate the Ordebec mystery at the same time. His twenty-something son, Zerk, whom he has only come to know in recent months, becomes Momo's caretaker, bringing with them the rescued pigeon, hiding out in the house of the first of the Ordebec victims, a conveniently secluded cottage.
Adamsberg installs himself in the home of another victim, the elderly Leone, felled by a blow to the head and now lying in hospital, unlikely to survive. What was it that Leone knew? He brings with him Lte Veyranc, recently returned to duty and spouting Alexandrine verse as is his way. He'll need the help of Commandant Danglard as well, useful as always for his extensive recollection of facts and fine taste in wine. He and Veyranc hate each other, and Vargas invents a clever scene to create a hilarious reconciliation.
There is a huge cast of curious characters, in particular the Vendermot family - the son Hippolyte who speaks whole sentences backwards, his famously busty sister, Lina, who can understand him, the younger brother Antonin who thinks his bones are made of clay and the brother, Martin, who concocts nourishing meals out of insects. Adamsberg must work with Capitaine Emeri of the local gendarmerie, who has airs above his station on account of being descended from a famous military general.
The story is both ridiculous and perfectly logical at the same time, enlivened by the way the characters, particularly those on Adamsberg's team play off each other. The Ghost Riders of Ordebec is quirky, original and such good fun and, best of all, the kind of escapism that manages to be intelligent at the same time. Not surprisingly it has won for the author her third CWA International Dagger award.
Posted by Caught Up in a Book at 21:40