The Rosie Effect by Graeme Simsion 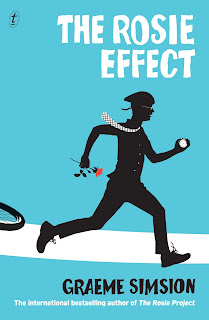 I was wondering what new problems Simsion would throw at his incredibly smart but socially inept hero, Don Tillman, in his sequel to the runaway hit, The Rosie Project. Don and Rosie, now married, are living in New York where Don has a post in the genetics department at Columbia University, and where Rosie has enrolled as a medical student. They have managed to find an apartment they can afford that meets Rosie's requirements for space and location and married life seems to be, well, rosy.
When Rosie announces she is pregnant, this unplanned event throws all of Don's careful planning and timetabling into disarray and he reacts badly, causing a chain of events that could spell disaster. They are thrown out of their apartment, Don has to undertake a course of counselling at the risk of deportation and he hasn't figured a way to tell his Aussie mate, Gene, that Rosie is not happy about him staying with them during his sabbatical in New York.
Don manages to keep all of the above secret from Rosie, yet as Rosie's pregnancy progresses, she seems to be drawing further and further away from him. Soon winning Rosie back is added to his list of challenges.
That is pretty much the story in a nutshell, and not much more than what you get from reading the publisher's blurb. The book is peppered with a cast of memorable characters and this plus Don's knack for solving one problem with another gives the tale plenty of oomph. The housing problem for instance is solved by Don's promise to look after an aged English rock-star's on-tap beer by moving into his downstairs apartment - it smells a bit, and sometimes the Dead Kings get together for a practise session on the floor above but it is in every other way ideal.
There are some hilarious scenes around Don's social worker, Lydia, who has decided he is unfit to be a father and sends him to anger management classes where he impresses the lads with his Aikido skills. To avoid adding stress to Rosie's condition, Don uses a daring piece of subterfuge to convince Lydia he is safe to stay in the US. Meanwhile Don's Dean requests his help monitoring a parenting study run by lesbians with a highly political agenda. Don's clinical intellectualism refuses to allow any leeway and he finds himself caught up in a new battle which will have crucial implications later on.
The story builds up to a wonderful climax in the beery apartment, and Don will be torn in all kinds of directions as he tries to look after his friends while saving his marriage. His big-heartedness in this regard makes him yet again a brilliant and complex hero while the humour never lets up. Narrating the entire story in Don's singular voice takes some doing and Simsion pulls it off brilliantly. The novel is highly entertaining while rejoicing in the things that make us all unique individuals.
Posted by Caught Up in a Book at 18:16