Hester and Harriet by Hilary Spiers 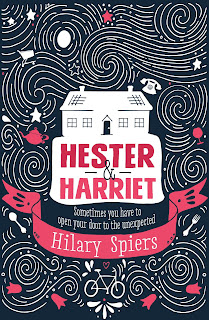 I'm not usually attracted by the Christmassy covers found on books published with the festive season in mind, or indeed, Christmas stories in general. However Christmas can intensify family issues that are already there, and as such makes a good basis for drama. Hester and Harriet is a refreshingly different Christmas story, about two widowed sisters, happy to see the festive day out in quiet self-indulgence at home by the fire.
Hester is the terse, thin one who cooks; Harriet is the dumpy, secret cookie eater ex-school teacher, kindly but occasionally given to the odd socialist rant. The two are hilarious together with their snippy dialogue and enjoyment of Hester's fine cooking, which the reader gets to enjoy as well.
So, to Christmas Day: the sisters reluctantly haul themselves out into the chill, Harriet driving badly as usual, expected to share the festive meal with cousins, George and Isabelle. Their cousins mean well, but the food will be terrible, the company worse. Fate intervenes when passing the old bus shelter, now home to a derelict ex-classics master named Finbar, they find instead a young girl and her baby.
Happy for an excuse to turn back home anyway, the sisters take in Daria, who is from Belarus, and her little chap, Milo. Daria is reluctant to tell the women why she is hiding in a bus shelter, and she seems fearful of strangers. Life gets more complicated when George and Isabelle's teenage son Ben turns up on their doorstep, having had a major falling out with his parents about his wish to chuck in school and study horticulture instead.
The women have no children of their own, so there is a hilarious learning curve in front of them. Fortunately Ben is surprisingly good with Milo and gets Daria to talk, and Hester and Harriet begin to formulate a plan to help her. Ben is so impressed by the food Hester prepares he starts to help in the kitchen and is allowed to stay for a few days anyway until something can be sorted out with his parents.
Spicing up the novel is the hint of danger in the lurking stranger who seems to be spying on Daria and asking questions around the village. The problem of refugees from political struggles abroad and their exploitation in Britain gives Harriet plenty to get on her high horse about, and even in their tiny village of Pellingham, dark deeds are afoot which the sisters are sure to get to the bottom of.
The novel is sprinkled with a clutch of humorous characters: Finbar the malodorous hobo with his fanatically perfect grammar, ladies man Teddy Wilson who seems to be in a spot of bother and his wife Molly who drowns her sorrows in drink, to name a few. The plot may take a while to get going, but there is still plenty to amuse with the characters playing off each other, smart and witty dialogue and an atmospheric setting. Quite a good antidote to the usual Christmas fare, but a good read any time of the year.