The Janus Stone by Elly Griffiths 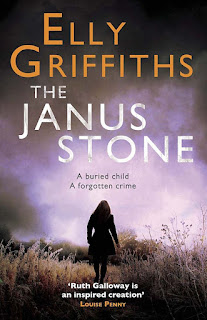 I just had to see what happens to forensic archaeologist, Dr Ruth Galloway, in the second book in Elly Griffith's series of mysteries set in Norfolk. By the end of The Crossing Places, Ruth has discovered she is pregnant at 39, and happy about it, though not so keen to reveal her secret to the father, a married man, or her born-again Christian parents.
At the start of the first book, Ruth was leading a quiet, spinsterish life, absorbed in her work at the university, attending the odd faculty party, but happy at home with her cats and Radio 4. She lives in a desolate spot on the marshes, away from the hurly burly, which suits her fine. Until she meets DCI Harry Nelson who needs her expertise with bones. Since then she's had her life threatened on more than one occasion, as she gets closer to discovering the truth, and her circle of friends has at least doubled in number. There's a lot more of that here in The Janus Stone.
When builders discover bones at a building site, Ruth excavates the tiny skeleton of a child, minus its head. The large house, which was once an orphanage, is being demolished to make way for apartments, and the burial of the bones at a doorway, implies a kind of ritual sacrifice with links to Roman deities, in particular, Janus, the god of beginnings and transitions, often shown with two faces.
However Ruth notices that layers of soil indicate a much more recent burial and Nelson questions Father Hennessey, who ran a children's home on the site around fifty years ago. He reluctantly reveals that two children ran away from the home in the early seventies, a boy of twelve and his younger sister.
The reader is treated to plenty of archaeological information about Janus and Hecate, some of the not-so-nice minor Roman deities thanks to Ruth's friendship with Dr Max Grey, from Sussex, who is involved in a dig uncovering a Roman villa. His insight is useful because of the clues at the crime scene which indicate a murderer with a weird obsession with some of the nastier Roman rituals, such as sacrificing children to place under doorways for good luck.
Max Grey and Ruth have a lot in common and he is obviously in line for some romantic interest; he's attracted to Ruth, that is soon clear. But how will she tell him about her baby? And is Max hiding a secret of his own? Everyone's got secrets it would seem.
The Janus Stone is another engrossing mystery, with plenty of factual material to get your teeth into while building up to an action-packed ending. Ruth and DCI Nelson are brilliant characters, each good at their job, but with the personality quirks that make the reader care for them. There are another six Galloway-Nelson novels so far, and this will no doubt become my go-to collection for a relaxing escapist read.