A Dangerous Place by Jacqueline Winspear 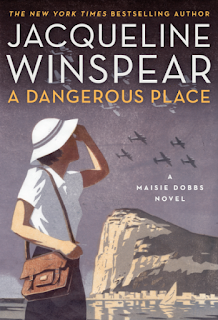 Maisie Dobbs enters a new phase in her life with this latest in Winspear's 1930s mystery series, and we are suddenly four years further on from her last story, finding Maisie in Gibraltar in 1937. Across the border the Spanish Civil War is going hammer and tongs, so what could Maisie be doing here in a pleasant but spartan guest house, sitting in cafes looking thin and not eating very much?
Maisie has it seemed suffered a terrible loss, and after a bit of travel, via India, her spiritual home, is set to return to her house at Chelstone, but has jumped ship at the last hurdle, reluctant to face the people who love her and relive her own grief. Gibraltar is an interesting place in 1937, while dangerously close to the battles over the border, but things take an interesting turn when Maisie trips over a dead body one evening. It belongs to a photographer, so the reader soon hears alarm bells ringing. What pictures had been taken that had caused his death?
The police are useless of course. They believe Sebastian Babayoff was beaten to death by an impoverished refugee - there are many flooding across the border looking for a safe haven. His Zeiss was stolen after all - but not his Leica, which Maisie discovers flung under some bushes. Maisie interviews the sister of the deceased, and seeing her grief determines to find out the real killer. She learns that not long before Sebastian's death, Carlos, a family friend and fisherman, died suddenly of a suspected heart attack while out in his boat. He and Sebastian would often row out together, Babayoff with his camera of course and with the presence of military ships in the Mediterranean, could the two have seen something they shouldn't?
This is the basic set up of the storyline but it is in some ways overshadowed by Maisie's own personal tragedy. While reminding her of the terrible cost of war on ordinary families, the discovery of the body is also a god's-send for Maisie, bringing out her detective instincts and she is soon busy snooping like anything and building a case map. Of course the authorities don't take kindly to her meddling, and Maisie herself is under surveillance, being followed by a young spy in the pay, Maisie suspects, of people in England who are worried about her.
The story really gets going when Maisie meets the mysterious Professor Vallejo, who can come and go across the border, but whose side is he really on? Maisie's gritty determination to find out will lead her into more than one 'dangerous place' which is all the more fun for the reader. I particularly enjoy the period atmosphere Winspear conjures up in this series, and Maisie makes a brilliant old-world spy. This may well be the direction the rest of the series takes her, as spymaster, Robert Macfarlane is on the scene, a key character in a previous book. It will be interesting to find out.