A Half Forgotten Song by Katherine Webb 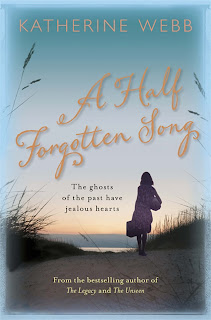 I started out thinking A Half Forgotten Song had all the hallmarks of a very engaging read, idea for a wet weekend, and I would finish it in no time.
To begin with, Zach is such a sympathetic character. He is recently divorced, and his ex-wife and little girl are leaving England to live in Boston with the ex's new man. His art gallery is struggling, and the publisher who commissioned him to write a biography of British master, Charles Aubrey, is on his case to finish the book, or they'll pass the job onto someone else.
So Zach is a guy under a lot of pressure. But in a burst of optimism, he packs a bag and heads off to the bucolic town of Blacknowle on the Dorset coast, where Aubrey did some of his best work. One of his models, Mitzy Hatcher, still lives here and Zach thinks she might know the origins of some Aubrey drawings that have come up for sale. Mysteriously titled 'Dennis', they don't fit with any other Aubrey work of the time.
Mitzy is an emotionally fragile woman in her eighties, with a gypsy heritage, still living in the isolated cottage where she grew up. She gradually lets Zach talk to her. Mixed in with Zach's narrative, is the story of Mitzy's early life, when she got to know the Aubreys and fell under the spell of the charismatic artist.
She's had a terrible time of it, scorned by the locals for being what she is, the daughter of the local witch/prostitute and destined for a similar career. But the Aubreys - Charles,  his exotic French/Moroccan mistress, and two daughters, Elodie and Delphine, Mitzy's special friend - are kind and make her part of the family. Charles in particular focuses a lot of attention on Mitzy, who has a simple, unadulterated beauty that fascinates him - he draws her at every opportunity - but this attention has dangerous consequences.
It turns out that Mitzy harbours some terrible secrets, more than one or two, and Zach's ferreting leads him to meet another mysterious woman - Hannah, who lives at the neighbouring farm. The two are obviously attracted to one another, but Hannah, while defensive about Mitzy, has a few secrets of her own and is prickly when questioned.
There seem to be just too many secrets lurking in the plot - even Zach's grandma has one up her sleeve. And I probably wouldn't have minded half so much, if such a lot of the narration wasn't from Mitzy's point of view. Her obsessive love for Charles gets every bit as tedious for the reader as it does for the Aubreys, and in spite of her tough time at home, she never really engaged my sympathy.
This is a pity, as I'd really enjoyed Webb's earlier book, The Unseen and had hoped for a similar reading experience. Perhaps if the book had been a little shorter, the plot moved on a little more briskly, A Half Forgotten Song would have avoided sinking into melodrama and been a far more palatable novel.