The Sacred River by Wendy Wallace 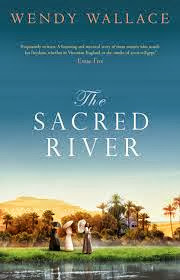 The Sacred River is Wallace's second novel following her immensely poignant and engrossing debut, The Painted Bridge, which took you into the heart of a Victorian mental asylum. It wasn't your typical Victorian mental asylum story though, with plenty of curious twists for the reader and an ending full of promise.
The Sacred River puts a similarly positive spin on what seems a grim beginning, this time with the possibility of imminent death. Three women take themselves out of a wintry London fog to Egypt on the recommendation of young Harriet Heron's doctor. Ongoing asthma attacks have made her a permanent invalid at the age of 23, but she hopes to see something of life before she dies.
A self-educated girl with a fascination for ancient Egyptian culture and hieroglyphics, Harriet persuades her doctor to recommend a sojourn in Alexandria. Her father's bank conveniently has a house there. Her mother, Louisa, is nervous of the idea, but a visit to a spiritualist convinces her that death is nigh, and she is determined to make the trip happen. She's a flighty woman, famous for her beauty, but not so good on practical matters - although she does pop a gun in the bottom of her trunk. The reader knows that this gun is going to surface at some stage later in the story.
Meanwhile, her husband arranges for his no-nonsense sister, Yael, to go with them. She's very reluctant as she has her good works to attend to and the responsibility of caring for her elderly father, but eventually she gives in.
On the journey Harriet meets Mrs Cox, newly married, and a dab hand with the tarot cards. Mrs Cox tells Harriet that she will meet her future husband on the boat and that she will have several children. The only eligible man in sight is Eyre Soane, a painter of landscapes, whose famous father once painted Louisa as a girl. There is clearly going to be journey into the past, and old scores to be settled.
Fortunately Egypt has a revivifying effect on Harriet, giving her the courage to imagine a future. The arrival of a fierce wind set to last for weeks drives Harriet and her mother to Luxor, where Harriet gets absorbed in the ancient sites at Thebes. She meets the German archaeologist, Dr Woolfe, and helps at the dig Woolfe is working on by making drawings of hieroglyphs.
Meanwhile Aunt Yael finds a purpose in life she has never felt before, starting a clinic to help the poor children of Alexandria, many of whom seem to be afflicted by eye infections.
The book is on the one hand a story of self-discovery for three women as well as being a wonderfully engaging novel full of drama, romance, secret shame and vendetta. In the background the natives are restless, and violence lurks around the corner. The insight from Harriet's translation of ancient Egyptian symbols is intriguing and gives the book an extra dimension. The writing is excellent too - it is hard to imagine anything else that would make this book better - one of my top reads for the year.
Posted by Caught Up in a Book at 17:14