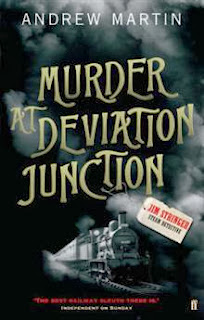 Jim Stringer is a railway detective, working out of York Station in 1909. It is just coming up to Christmas and the setting is a striking mix of the dark satanic mills, fire and brimstone connected with the Industrial Age, and snow.
Jim has been sent to arrest a steel worker for assault at a football game, but somehow ends up discovering a murder instead. The contrast between the steel works and the snow drift that brings his train to a stop at a tiny station couldn't be more obvious. When a derelict shed is searched by the snow clearing gang, a long dead body turns up.
Railway reporter, Stephen Bowman, who is sharing Jim's carriage looks distinctly uneasy - a young photographer named Peters had disappeared a year before, and it turns out his camera was stolen about the same time. Had Peters uncovered an incriminating secret that led to his death?
Jim runs the risk of dismissal by pursuing the murder case, but he can't let it go. He has his interview for the position of sergeant coming up, and his young family needs the money a promotion would bring. But Sergeant Shillito has other ideas and would like to take Jim down a peg or too. Then there's Christmas to pay for and Jim's small pocketful of cash is slowly depleted as he hops on and off trains, sends cables and stands witnesses for meals and drinks.
Jim's under a lot of pressure as his investigations lead him to uncover the story of the Cleveland Travelling Club - a group of five prosperous men who journeyed daily from Whitby to Middlesbrough in their own special carriage. It's not long before he finds that young Peters isn't the only mysterious death, several of the club members have died in odd circumstances as well.
The case will take Jim as far south as London and into the wintry north of the Scottish Highlands, and all the while the clock is ticking towards Christmas and all the pressure of his interview and family commitments. There's going to be plenty of danger and Jim will have the chance to put his railway knowledge and skills as a fireman to good use.
You don't have to know a thing about steam trains to enjoy the Jim Stringer series. Andrew Martin recreates the steam age, coloured with the voice of the Yorkshire working classes, making these books delightfully different. There is brilliant characterisation - Jim's fellow detectives add some lively banter as does Lydia, Jim's sparky wife who has feminist ambitions. While there is plenty of action, there is also wit and social awareness, making the books a reasonably intelligent read and as such all the more satisfying.