Legacy of the Dead by Charles Todd 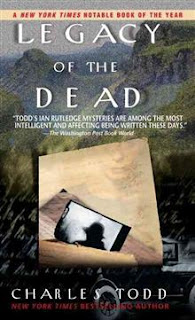 It always helps move a mystery story along when the investigator has a side-kick to talk to about the case. Holmes has Watson, Poirot has Captain Hastings, Richard Jury has Melrose Plant.
Charles Todd's Inspector Rutledge series is no different. This Scotland Yard detective is a veteran of the First World war; haunted by his experiences in more ways than one. He had to deliver the coup de grace following the execution of Hamish McLeod, his friend and fellow officer who refused to lead his men over the top again into likely death. While Rutledge distinguished himself in battle he carries the dreadful guilt from that day on the battlefield, as well as Hamish's ghostly presence inside his head.
The two create some interesting dialogue - Hamish's Scottish voice is quite distinctive from Rutledge's, and he never holds back when it comes to airing his viewpoint. He is particularly present in this Legacy of the Dead. Bones have been discovered on a remote Scottish hillside belonging to a woman the age and size of an Eleanor Gray who may have disappeared two years before on a visit to Scotland. Her mother, the redoubtable Lady Maud insists that Rutledge finds out what happened to her.
Rutledge is reluctant to visit Scotland as this is likely to make Hamish more vociferous than ever. For this reason he has been avoiding visiting his godfather near Edinburgh, David Trevor, whose son was Rutledge's boyhood friend, also killed in the war. Things are made more complicated when a series of anonymous letters in the town of Duncarrick, lead to the arrest of a young woman, accused of murdering Eleanor Gray and stealing her baby. The local policeman asks Rutledge to help prove her innocence.
Fiona McDonald refuses to say anything in her defence about where her son, Ian, might have come from. When Rutledge visits her in the Duncarrick police station, it is clear from Hamish's reaction inside his head, that this Fiona is none other than Hamish's fiancé from before the war. Rutledge vows to clear her name, in spite of Fiona's fears that to do so will put little Ian in harm's way.
It's a complex mystery, with lots of red herrings and a slow burning plot where clues are carefully assembled, before building to a thrilling climax where Rutledge gets to put into practice a trick with a knife he learned from the Scots troops under his command. Crucial to the storyline is the ongoing effect of the war on the disrupted lives of those left behind.
Rutledge is an intuitive detective, who annoys his superiors and because his mind is so messed up, he's one of those sympathetic loners that fiction is so fond of. The Rutledge series is a collection of classic whodunits that are loaded with atmosphere, wonderful characters and plenty of suspense - perfect rainy weekend reading.
Posted by Caught Up in a Book at 15:42