The Case of the Missing Books by Ian Sansom 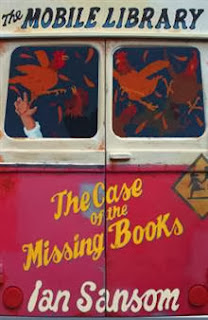 You never know what you will find among your library's ebook collection. I discovered Ian Sansom's madcap novel, The Case of the Missing Books, the first in a mystery series featuring overweight, half-Jewish, half-Irish librarian, Israel Armstrong.
When Israel fetches up at the Northern Irish township of Tundrum, he is already grumpy. He has had a long, nauseating journey involving bus and ferry. To cap things off, he finds on arrival that the library he has been employed to manage has been closed by the Tundrum council.
Having qualified as a librarian some years before, Israel has never had a library job - instead filling his days working at a discount bookshop in Essex. His ambitious girlfriend, Gloria, has encouraged him to take the Tundrum job, suggesting this will kick-start his library career. It is a case of disappointment upon disappointment.
Linda Wei, Israel's boss at the council, is more optimistic. It is all merely a resource reallocation and she has another plan for Israel; in effect he will drive the mobile library, with the new title of Outreach Support Officer. He'll be assisted by belligerent ex-boxer, Ted Carson, who runs the local taxi service and knows about engines. It was Ted, after all, who has been hiding the old library bus in a chicken shed.
The bus's revelation to Israel, rusting and redolent of the hen-house, is yet another disappointment, as is Israel's billet with a feisty redhead named George who thinks nothing of hosing him down while she's cleaning her farmyard, and housing him in a one-time chicken coop that still boasts a rooster.
Also in the household is George's tee-total, Bible quoting father and her student brother, Brownie who at least attempts to be helpful, lending him his combat trousers and t-shirts with questionable slogans. Israel seems to have packed more books than clothing.
Discovering that the old library is missing its books and that Israel must track them down is a core part of the plot. As he visits his customers in an attempt to find items from the collection, Israel meets a marvellous cast of odd-ball characters, including Dennis the carpenter and the wealthy hermit, Pearce Pyper. All this is interspersed with hilarious dialogue between Israel and Ted, who certainly make an odd couple.
The story of a stranger from the city trying to make his way in a remote country town he can't wait to leave and where he is frequently the butt of jokes is not a new one. Israel's bumbling and oversensitive character makes him perfect for the slapstick misadventure that befalls him. Sansom's writing is sharp and weirdly quotable. His summing up of Israel early on says a lot about his character - how books had spoilt him so that 'his expectations were sky-high and his grasp on reality was minimal'.
It seems Israel has a lot to learn about Tundrum, himself and life in general. I shall enjoy picking up where The Case of the Missing Books leaves off to see how he gets on.
Posted by Caught Up in a Book at 16:26