The Mapping of Love and Death by Jacqueline Winspear 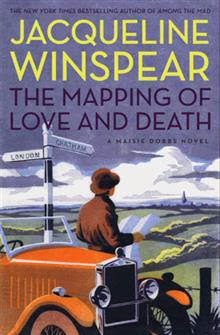 I thought a Maisie Dobbs novel would be useful to have on holiday and picked up The Mapping of Love and Death, the seventh book in the series. In this story Maisie is asked to look into the recently exhumed papers of a young American cartographer killed in the Somme. As we know it took many years for the battlefields of World War One to give up their dead, and so here we are in the early 1930s, with a new mystery that will take Maisie back to the war that changed her life.
The parents of Michael Clifton are in London with Michael’s journal and a bundle of letters written to him by a woman signing herself as The English Nurse. Michael had bought a tract of land in California and having died intestate the legal ownership of the land is in doubt. Edward and Martha Clifton want to meet this nurse to see if she might have a claim, and indeed Martha longs for a grandchild – she has a second sense about these things.
No sooner than they have sent the documents off to Maisie, than the Cliftons are attacked in their hotel room – someone is clearly worried about what the documents might reveal. On top of this, Michael’s postmortem shows that he was murdered by a blow to the back of the head, not killed in the explosion in which his fellow cartographers perished.
As Maisie interviews officers that may have known Michael, and Billie works from a list of nurses that have answered an advert about the case, another murder occurs and Maisie herself is attacked. But she is not deterred and in fact is more concerned for the life of her mentor and former colleague, Maurice Blanche.
Maurice has been struggling with a chest infection all winter and looks worse every time Maisie sees him. In the care of her old flame, Andrew Deane, Maurice encourages Maisie to be more friendly to James Compton who has always struck Maisie as lacking seriousness. She hadn’t realised that James has been under the burden of the terrible events of the war. Apparently his cheerily offhand manner is just a front.
As usual Winspear has done her research on yet another aspect of the war – the work of the map-makers, whose skill was vital to British forces on the battlefield. There is also some interesting material when Maisie talks to a film-maker who is making early documentaries about the war using live footage. Could there be a film clip showing Michael Clifton and possibly even his murderer?
We have a good solid whodunit on our hands with a violent criminal on the loose who must be tracked down before he strikes again. But the story is even more complicated by the feelings of sorrow Maisie experiences at Maurice’s fragile health and the possibility of a relationship with James Compton. Would Lady Compton and Lord Julian ever countenance such a thing?
If it all sounds a bit intense, there’s Maisie’s posh friend Priscilla up to her old match-making tricks and side-kick Billy with his Cockney turn of phrase to lighten things up a bit. All in all not a bad read for relaxing after the Christmas pud.
Posted by Caught Up in a Book at 23:27