From a Distance by Rafaella Barker 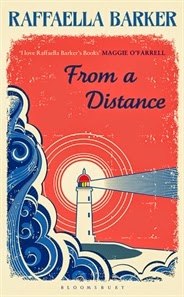 From a Distance concerns three main characters over two periods of time. I was enthralled by Michael, just off the ship that brought him home from the war, the second world war that is, thin and damaged. He doesn't want to go home to Norfolk, even though he has parents and a fiancée waiting for him. He just hangs around Southampton smoking and feeling sorry for himself and all the mates as well as his brother who won't be coming home. Finally he jumps on a train and finds himself in Penzance.
I was desperate to discover what he does next, but all at once we're in present day Norfolk, in Luisa's kitchen where she's making ice cream and worrying about her nineteen year old daughter who has gone to India. What Luisa has to do with Michael will have to wait, for suddenly here we are with Kit, who has inherited from his mother a lighthouse in the same Norfolk town where Luisa lives. Kit's from Cornwall so there's sure to be a connection with Michael there, and the lighthouse mystery gives the story a bit of oomph.
But there's such a lot of Luisa, an effusive mother and wife of Italian descent which automatically makes her gorgeous. Ice cream runs in her blood - her father ran a fleet of ice cream trucks - and Luisa experiments with unusual flavours involving herbs and rose essence. You can tell she's artistic. Kit makes a hit with Luisa's family, including husband, Tom, her children and Tom's sister, Dora. He's such a likeable guy, and the lighthouse gets everyone talking. But maybe there's just too much of a spark between Kit and Luisa!
The story slowly gets back to Michael, who for me was far more interesting. He becomes friendly with several artists who are a breath of fresh air after the war, especially Felicity, a fabric designer who turns out to be the love of his life. How can he ever go home?
The theme of promises made as men went off to war and the dilemma faced when they returned (can you ever go back to where you left off, or is best to start again?) hovers in the background, begging to be dealt with more fully. There's a lot of description of how designs come together, their patterns, textures and colour, and Cornwall sparkles by the sea. Ice cream also gets a fair amount of attention in the same way. There is such a lot of detail to imagine that the characters become a bit shadowy.
I would have liked to know a bit more about Michael's demons and the girl he left behind. He is saved by Felicity, who in my mind tended to merge into another Luisia - both artistic, free sprits and both do their hair the same way.  Perhaps this is a hymn to Cornwall and also Norfolk, which has a lovely summery feel and loads of village hospitality.
And I guess that adds to the charm. But the theme of how relationships are upset by the upheaval of war, or post-war trauma, to say nothing of how secrets from the past affect the later generations, could have been fleshed out much more in this book. This obvious omission makes From a Distance flounder from a lack of narrative drive and therefore something of a disappointment.
Posted by Caught Up in a Book at 00:51