Revenge of the Middle-Aged Woman 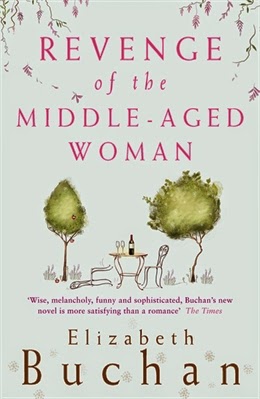 Rose Lloyd has plenty to feel aggrieved about not long into Elizabeth Buchan's novel Revenge of the Middle-Aged Woman. Nathan, her husband, dumps her after twenty-five years of marriage and she loses her job - both vacancies filled by her assistant, Minty.
She's worked with Minty for several years, compiling the book review pages for a newspaper and Rose regards Minty as a friend, sharing secrets about her relationships with family and even her old-flame, Hal, a glamorous adventure travel writer. (This reminded me of an episode from 'Black Books', which was slightly off-putting.)
Minty has used snippets from these conversations with Rose in the early days of her relationship with Nathan to argue that Rose doesn't really appreciate her husband and has never forgotten her first love, Hal. Minty is also twenty years younger than Nathan and knows what she's about in the bedroom. How could Nathan resist?
And Rose is such a sweetie, with brains to boot. She achieved a First at Oxford, but put her career on hold while raising her children, does all the cooking and creates a spectacular garden. She drops meals into the housebound elderly gent next door and talks about the buses with him - the great love of his life. Really if anyone has been under-appreciated, it's Rose.
So I was quite prepared for scenes of rage-induced vengeance, shredded suits, emptied bank accounts, public shaming - the works. I wasn't sure I was going to enjoy this, but it certainly seemed as if Nathan had it coming. I couldn't make up my mind if it would be a good thing because it would reduce Rose to the level of the Mintys of this world and it is obvious she is so much better than that.
A chance encounter with Hal offers yet another avenue for potential revenge, but Hal gave Rose an impossible choice all those years ago, leaving her in South America, broken hearted and ill. Poor Rose, so smart but so bad at choosing men. Thank heavens one of her best friends is a savvy Parisienne, who takes her in hand and encourages her to tart herself up a bit. Maybe glamour and success are the best revenge of all.
There are sub-plots involving Rose's grown-up children and their relationships, and Rose is always there with a shoulder to cry on, as you would expect. Rose also worries about her widowed mother who finds the marriage break-up a terrible shock.  There's even a bit about politics and the ethics of how the media treat figures in the public eye.
The book makes a decent fist of standing up for middle-aged women who care for others when all around them it seems people are out for themselves. The narration is all from Rose's point of view and perhaps this makes the story drag a little as she is never allowed to be as outrageous as the other characters. Joanna Trollope (the queen of this genre) creates a much livelier style through multiple viewpoints and her unerring ear for dialogue.
Revenge of the Middle-Aged Woman is a very readable book but published in 2002, it is beginning to show its age. Nevertheless I shall be interested to try one of Elizabeth Buchan's more recent titles to see how it compares.
Posted by Caught Up in a Book at 16:10