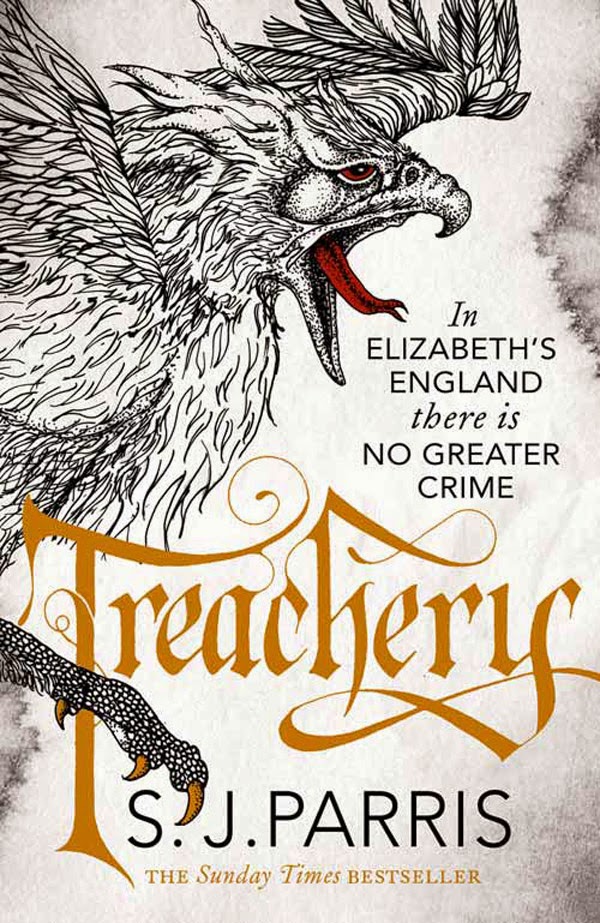 The good thing about historical novels, especially period mysteries like this one, is that you learn a bit of history while you're immersed in a rip-roaring yarn. The bad thing is that a quick dip into Wikipedia, or something more erudite if you prefer, will remind you that your historical hero or heroine can't keep all this sleuthing up for ever as there are well-documented events in the pipeline that can't be ignored. And I know all to well what happens to Giordano Bruno and his pal Sir Philip Sidney, and this makes my enjoyment of S J Parris's superb series all the more bitter-sweet.
In Treachery, Bruno and Sir Philip are sent to Plymouth to reconnoitre with Sir Francis Drake (and we know all about him too!) to collect a Portuguese ally of Queen Elizabeth's - Dom Antonio, who has been on the run from Philip of Spain. Drake is all set to launch a fleet against the Spanish who have been capturing British ships and Sidney hopes to join in the fun and collect a fortune in prize money. He has brought Bruno along as Drake has requested help with a matter requiring scholarly input.
But all these enterprises are put on hold when a murder takes place on Drake's ship, the Elizabeth Bonaventure. Made to look like a suicide, the death of Robert Dunne - a gentleman who has joined the fleet to recover losses sustained at the card tables - soon throws up a number of suspects, and a load of red herrings. Was one of Dunne's creditors driven to murder him? There is also evidence he could have been involved in blackmail, while his widow scarcely sheds a tear - could she have paid for an assassin?
Jenkes, a book dealer and enemy Bruno first encountered in Oxford, appears on the scene and it's no coincidence that Drake has in his possession a Coptic text that could be a lost gospel, the very text he wants Bruno to decipher. There are enemies out to get Drake too, some eager for revenge and others for the generous reward on offer from Philip of Spain for Drake's death. All this is complicated by the arrival of Drake's young wife and her widowed cousin who Sir Philip is sent to entertain in his courtly way, while Drake deals with more serious matters. There are more characters than you can shake a stick at and some less than salubrious settings, including the House of Vesta, a brothel with a name for providing discretion and very young girls.
Of course there is danger at every turn for Bruno who has a talent for breaking and entering and narrow escapes. Thank goodness he can handle a knife. While it is Sir Philip who dreams of action, it is always Bruno who turns up with broken ribs, cuts and bruises. He's a lot more than a gallant hero though and his knack with memory and solving problems are balanced by a philosophical turn of mind which seeks to understand the motives of his opponents while showing empathy for their victims.
Treachery is one of those books that has you sitting up into the small hours or longing for the odd spare moment when you can pick it up again. The plotting is first class, as is the writing which is immediate yet descriptive enough to plunge you into Elizabethan England. This is another credit to an author who has made a brilliant character from a fascinating historical figure and I truly hope this isn't the last we'll see of Bruno.