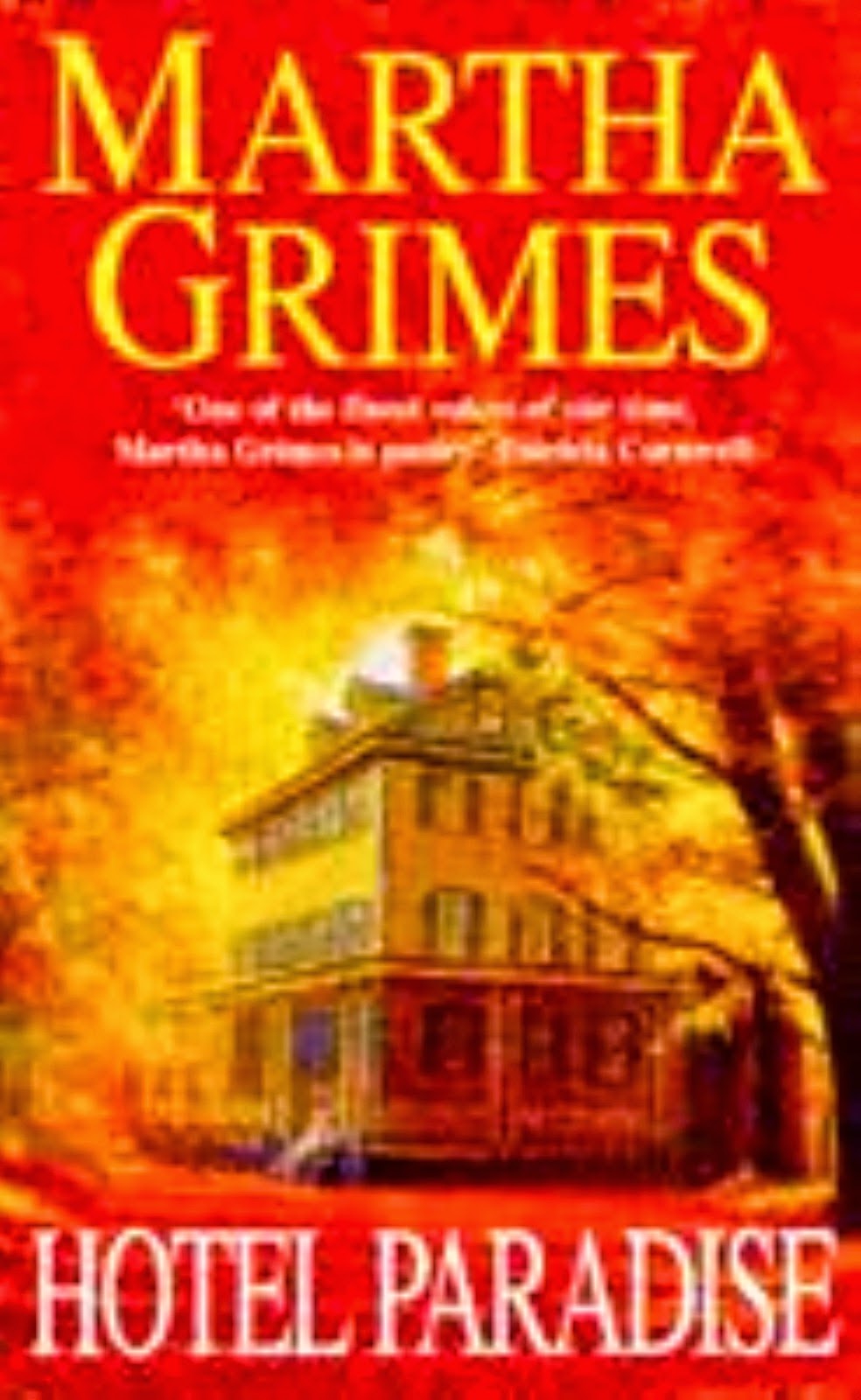 Martha Grimes writes the Richard Jury detective novels, which regularly see its charismatic Scotland Yard detective sort out a complicated murder mystery, the plotting of which would have done Agatha Christie proud (high praise from me indeed!), aided by his good friend, the reluctant peer Melrose Plant, and set around a quaint English hostelry which also lends its name to the title. Somewhere in the mix there is often an intelligent and quirky kid.
When Grimes decided to write Hotel Paradise, she began a series of novels where the kid is the sleuth, in this case the quirky and intelligent Emma Graham. Emma is twelve, and lives in an old hotel at Spirit Lake, once the site of several hotels that have long since closed up shop, as holiday makers found other, brighter spots to visit instead.
The Hotel Paradise is still hanging in there, with Emma's mother running the kitchen, her wonderful cooking its main attraction. Her business partner manages drinks and accounts, but mostly drinks, while her ditzy daughter swans around as if she owns the place, much to the disgust of  Emma's great aunt Aurora Paradise.
Aunt Paradise lives on the top floor, drinking cocktails and reliving the past, which comes in handy when Emma begins to look into a forty-year-old tragedy, the drowning of another twelve year old girl, Mary-Evelyn Devereau. Brought up by aunts, it has long been a mystery why Mary-Evelyn took a leaky boat out onto the lake one evening, her disappearance not noticed or ignored until it was too late.
Emma is similarly ignored by her own family, her mother too busy with the hotel, her brother and his pal writing and performing plays, so that apart from her regular stints waiting tables, she has a lot of free time. No one knows what she gets up to or where she goes, which is convenient for investigating a possible murder. Her friendship with the local police chief, the handsome, dependable Sheriff DeGheyn also comes in handy as well as her talent for cultivating friendships with older people. When another mysterious death occurs which is connected to Mary Evelyn's family, it seems even more likely that Emma is on to something.
Emma is a wonderful narrator, who never gives up, telling the most outrageous porkies to worm out the information she needs. She is so solitary, and put-upon at home, she has the reader's sympathy in spades - it just well people around town look out for her.
Grimes has created some terrific small town characters, too: the speech impaired brothers, Ubub and Ulub, and their fellow bench mate Mr Root, who is always happy to translate. There's Maud at the Rainbow Cafe who would be perfect for the sheriff, if he wasn't already married. There are the elderly shopkeepers, Miss Flyte who designs spectacular candle arrangements and her neighbour Miss Flager who provides wonderful morning teas at the back of her gift shop, to say nothing of  the butterfly collector, Dr McCoomb who signed Mary Evelyn's death certificate all those years ago.
The plot meanders through numerous amusing conversations and richly described meals as Emma slowly gets closer to what happened to the drowned girl. As a child of the same age, the reader is only too aware that Emma could also be in danger, and more than one character is a little sinister. This gives the book just enough tension to keep the reader up at night.
When it comes to wry characters, droll observations, and the recreation of a place where time seems to have stood still, Grimes is second to none. By the end Emma has made some stunning discoveries that the police are not even close to finding, while there is still plenty of backstory to develop in the next book, Cold Flat Junction. What a joy!
Posted by Caught Up in a Book at 22:53