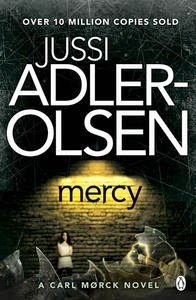 What is it about maverick Scandinavian detectives that we like so much? Eager to read beyond Nesbo and Mankell, I took a punt on Danish author, Jussi Adler-Olsen, and read the first in his Department Q series.  Mercy introduces us to his taciturn, difficult detective, Carl Morck. Of course we expect him to be taciturn and difficult (aren't they all?), but this guy is verging on antisocial, and who can blame him?
Morck has just come back from extended leave, after a shooting which left him wounded, one fellow officer dead and another paralysed for life. He is bitter and burdened by guilt when he turns up at work, where he discovers he is to be in charge of Department Q. The government wants some high profile cold cases solved, and are happy to throw money at a police force which is critically under resourced, while Morck's boss is happy to siphon off a chunk of the funding to other departments.
Morck's new office is in the basement and his only staff will be a kind of janitor dogsbody, a Syrian refugee named Assad. This is fortunate, as Assad is everything his boss isn't: willing, cheerful and polite. Assad is also smart, methodical and has contacts who know about forged documents. Somehow this comes in handy later on. Clearly he's a character full of mysterious potential that will slowly unfold as the series progresses.
The two make up one of those oddball couples which detective fiction is peppered with, going back to Holmes and Watson. And it works really well, giving a potentially harrowing story a bit of light relief.
By chance, one of the first cases that interests them is the disappearance of prominent young politician and party hopeful, Merete Lynggaard, assumed drowned. This is just as well, as all the while we have been getting to know Morck and his new set-up, Adler-Olsen has been feeding us scenes from Merete's imprisonment. For five years Merete has been locked in an underground bunker, which her captors leave in darkness, unless they feel like turning the lights on 24/7. You can imagine what that does for Merete's body-clock.
Her captivity is lacking in basic sanitation, she's on minimal rations, and there is periodically an increase in the air pressure. Meanwhile she is left to try and figure out why she is being punished in this way. The reader is soon aware of two possibilities. In her political career Merete seems to have annoyed quite a few people and stirred up some potential jealousy. Or does the reason go back to her teens, when she was involved in a terrible car crash which destroyed two families? Her private life has been secretive, revolving around caring for her younger brother, whose mind was destroyed by the accident - a situation she tells no one.
Whatever the reason, Merete's time is running out, and what seems to be a cold case has a sudden urgency which Morck and Assad take time to discover. There's nothing like a dose of dramatic irony to ramp up the tension in a story and it certainly delivers the goods in Mercy. The plot surges towards a dramatic showdown that makes the shooting described at the beginning of the book seem like a minor scuffle.
Mercy is a brilliant opening to a very promising series, with enough page-turning action and nail-biting suspense to keep you interested, nicely balanced with interesting characterisation and wry humour. It is as well that the story tends to sweep you along, because I found some of the writing a little clunky - probably due to the translation into English - something I've never experienced reading Mankell. It won't stop me picking up the next books in the series though.