After the Bombing by Clare Morrall 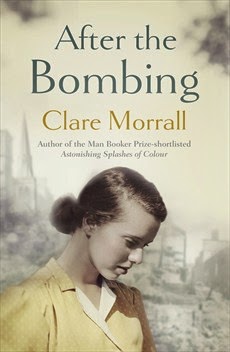 People struggling with events from the past often feature in Clare Morrall's subtly nuanced novels, and what could be more harrowing than losing your family in the blitz of World War Two. This is what happens to fifteen-year-old schoolgirl, Alma Braithwaite, when bombs rain down on Exeter in 1942. Her parents are doctors, killed when the hospital takes a direct hit, as does the boarders' house at Goldwyn's School.
The girls have been chivvied out to the safety of their shelter to await the all clear, and the sound of the raid is truly terrifying. Fortunately Alma is in the company of her best friends, lanky Marjorie (Giraffe), brazen Natalie and Jane Curley (Curls) who has a prodigious talent for playing the piano with concerts and recordings already to her name.
With nowhere else to go, the girls are eventually found billets throughout the town, and Alma and friends find themselves under the care of Robert Gunner, a junior lecturer at the university and warden of Mortimer Hall, the hostel for the small group of undergraduates who haven't been swallowed up by the war effort. Gunner himself is only twenty-seven, but with a serious limp has been turned down by the services. He does his bit with fire duty each night, and now has the care of four young girls on top of everything else.
The novel switches between the spring of 1942 as the girls settle in at Mortimer Hall and the unsettled feelings that run between the various occupants there to twenty-one years later when a new headmistress is set to begin at Goldwyn's School. Wilhemina Yates is determined to shake things up and make improvements but comes into conflict with the music mistress, none other than Alma Braithwaite.
Alma has never left Exeter, never left her parent's house, where she rattles around alone with total disregard for housework, and apart from her brief stint training to be a teacher, has never left her old school. As the new school year begins, she sees she is to have young Pippa Gunner in her form class. Could this be the daughter of Robert Gunner and will their paths cross again after all these years?
When Robert learns who Pippa's form mistress is, he too is perturbed by the thought of past events flooding back from those weeks after the bombing. And even Miss Yates has her own secret that she fears could destroy her career, and her own post-bombing trauma.
All three characters are on a collision course that forces them to relive what happened during the war, and if possible move on to a new future. Morrall has made them each well-rounded and difficult in their own way, enough to drive the plot towards its clever ending. For even though they are impelled by what happened over twenty years ago, their confrontation is set against a major event on world stage from the present - 1963, that is - not too hard to guess what that could be!
Initially I had been deterred by the thought of yet another book about the war, but really I should have realised that this would be an original and engaging story, with an author like Morrall at the helm. One or two recurring themes here from previous books include the power of music to transform lives, as well the problems associated with reclusive and socially awkward personalities - themes that are well worth revisiting as they make Morrall's books so interesting.
Posted by Caught Up in a Book at 21:21