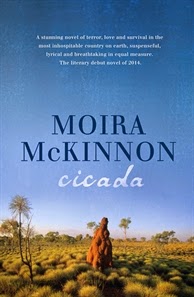 Moira McKinnon's impressive first novel begins when Emily Lidscombe, a well-to-do English woman, gives birth to a black baby at Cicada Springs, the holding she runs with her husband in Western Australia.  This is a challenging situation to begin with and her husband, William, reacts with rage and vengeance. Set just a few years after First World War, this is a time when the relationship between white landowners and Aborigine people is difficult at best.
Distraught, terrified and still recovering from the birth, Emily escapes into the wilderness on horseback, accompanied by her Aborigine maid, Wirritjil. Most of the rest of the book follows their escape and survival in the relentlessly hot and arid landscape, while William sends John, his stockman, and his war veteran brother, Trevor, to hunt them down and bring Emily back.
The two women form an uneasy alliance, and gradually Emily begins to trust Wirritjil, though she is hampered by an injured foot that threatens to turn septic. Fortunately Wirritjil knows how to keep them both alive and her bush survival skills make for fascinating reading.
By chance, Emily and Wirritjil meet a helpful herdsman who is part of a team taking their cattle to Broome on the coast. She asks him to send a telegraph to her sister in England as Kathryn Lidscombe is smart and will know what to do. But soon the story of the missing women is out and events call for a police contingent to search as well. The pace picks up and what starts out as a survival story becomes more nail-bitingly tense as the women's pursuers close in.
Scenes showing the harsh treatment of Aborigine people, their marginalisation on their own land, and summary punishments for minor offences are vividly recounted. But they aren't the only victims. William is disturbed by feverish dreams and fears no doubt brought about by his tuberculosis. He has been rescued by Emily's mother from a poor family, educated and cared for as a kind of pet project. The farm is to be the making of him but it is all going wrong and he'd rather be a poet. Trevor, illiterate and haunted by what he had to do in the war is also struggling.
In fact you are hard placed to find a white character with any dignity - most are brutalised by their attempts to make a living in such a harsh terrain and their dealings with the Aborigines, seen by the whites as inferior with a potential for mischief. Kathryn is a breath of fresh air, but the main heroes are the Aborigines Wirritjil and the tracker, Charcoal.
Moira McKinnon has an academic background in indigenous health and has researched widely to paint a brilliant picture of Aboriginal folklore, language and their close connection with the land. She obviously has a barrow to push, but this doesn't make the book a simple exposition. The story is strong enough to sweep the reader along and her descriptions of the landscape, wildlife and weather are breathtakingly real. Cicada is altogether riveting.
Posted by Caught Up in a Book at 13:59