Leaving Everything Most Loved by Jacqueline Winspear 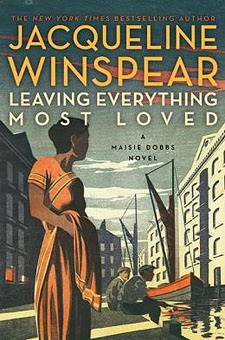 Everything seems to be going well for Maisie Dobbs in this latest instalment - she has plenty of money thanks to an inheritance from her former mentor Maurice Blanche, she has a wonderful relationship with James Compton, the son of her benefactor and her investigation business is going well with two loyal staff. But she is starting to develop itchy feet.
Her new case is to look into the death two months before of an Indian woman, Usha Pramal, who was shot on the banks of the Camberwell canal. Her brother, a reasonably well-to-do engineer, has arrived from India, requesting the police reopen the case, and crusty old Inspector Caldwell has turned to Maisie to do the leg work.
Maisie's investigations take her to a lodging house run by former missionaries, Mr and Mrs Paige. Here they offer accommodation to Indian ayahs who have been let go by their English families once their children have been packed off to boarding school. The Paiges seem altruistic, helping the woman find respectable work, mostly cleaning houses, and looking after their money until they have enough to return home. But how much money are they keeping for themselves and why are they reluctant to talk to Maisie? And why is their chum, the local vicar, so cagey about his time in India?
Mr Pramal tells Maisie about an Englishman who formed an unsuitable passion for his sister - he was in fact the reason Usha agreed to go to England with the family who employed her. But no one knows the name of the Englishman or why Usha left her position so suddenly and needed rescuing by the Paiges.
Many clues must lie in the character of Usha herself who, according to all who knew her, was a genuinely beautiful person, and who seemed to walk on air. When Maisie searches her room, she finds a large sum of money hidden in the mattress. Just when Maisie finds a witness who might have some information, - Usha's fellow inmate at the Paige's, Maya Patel -  the young woman is shot in the same way as Usha. The recent death gets the police back on the case, but the killer seems to have vanished without a trace.
Meanwhile Billy is trying to find a missing person - in this instance a young lad who has absconded from Dulwich College (P G Wodehouse's alma mater in case you're interested). His father  has waited weeks before requesting help, hoping young Robert will come home, and while he seems genuinely concerned he isn't giving out much information.
Of course, we all know that chances are the two cases will converge, but Billy seems to have lost his knack after almost losing his life in the previous book. Meanwhile James is pressing Maisie to make him an honest man and give up everything to travel with him to Canada, where he's going to help test some exciting new fighter planes. Hitler is rattling his sabre and there's sure to be another war - this is 1933 after all.
Jacqueline Winspear has put together another nicely-turned mystery with her determined investigator, Maisie Dobbs, and doing her usual good stuff with her period setting. Her descriptions of the plight of unwanted ayahs adds a bit of historical interest too. And while the book keeps you interested with all its twists and turns, it does get a bit bogged down with Maisie's anguish over what to do next. It seems that change is in the air with the next book, due out later this year, and I'm pleased as Maisie was getting into a bit of rut. How she adapts to the coming storms of another war could be interesting.