The Pierced Heart by Lynn Shepherd 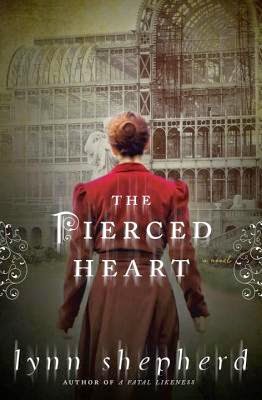 It must have been difficult being a private inquiry agent in Victorian England, if Lynn Shepherd's protagonist, Charles Maddox is anything to go by. Benighted could be one way to describe him and this is obvious from page one, when Charles is travelling by train to a remote part of Austria, a journey that must be completed by a lengthy ride in a coach.
The weather is miserable and so is he, having two months before lost his occasional lover/servant and the child he hadn't realised she was carrying to an ectopic pregnancy. He is full of guilt and remorse but things get worse when he arrives at the imposing ancestral home of Baron Von Reisenberg, a pale, thin, chilling man who shuns the light and has strangely long teeth.
Aha, we are in vampire territory, says the reader. And yes the term 'exsanguination' does crop up throughout this book, but knowing Shepherd, you can be sure she will find a plausible explanation for anything too fanciful, that is both ingenious and likely to keep the reader guessing until the final page.
But back to Austria. Charles has been sent on behalf of the Bodleian Library to discreetly examine the suitability of a bequest that his Austrian host would like to offer this venerable establishment. While he's there he witnesses many strange occurrences, and by night hears some peculiar sounds, and being the determined investigator that he is, decides to explore. This upsets his host no end, and Charles finds himself mowed down by Von Reisenberg 's guard dog before things really take a turn for the worse.
By the time Charles gets back to England he's even more unsettled, while London is full of people gathered to see the Great Exhibition at the purpose-built Crystal Palace. This makes his usual dashing about even more difficult with the streets unusually congested. And dash about he must as Sam, his policeman friend, has called on his help over a series of grisly murders involving prostitutes. Could there be any connection to Von Reisenberg who has mysteriously arrived in England?
Charles's investigation is mixed in with the diaries of Lucy, the daughter of a kind of illusionist cum showman who wants to develop Lucy's talent as a medium in order to improve their fortunes. Her health and treatment by an Austrian doctor with alarming results ups the tension of the novel. Charles's discoveries and Lucy's experiences are set to dovetail as the plot hurtles to an exciting end.
Shepherd writes wonderfully with her vivid present-tense style that keeps things fairly pacy, while her distant third-person narration adds a suitably Victorian tone. It amazes me how she can make this work, but some how it does and adds to the reader's enjoyment hugely. The use of Lucy's diary (both first person and past tense) throws in a nice contrast so you never tire of either.
I adore these books - they're probably my favourite mystery series at the moment - and I particularly love how Shepherd draws on research and her depth of knowledge of literature and history from the period. It all adds up to a particularly rich as well as entertaining reading experience.
Posted by Caught Up in a Book at 15:44