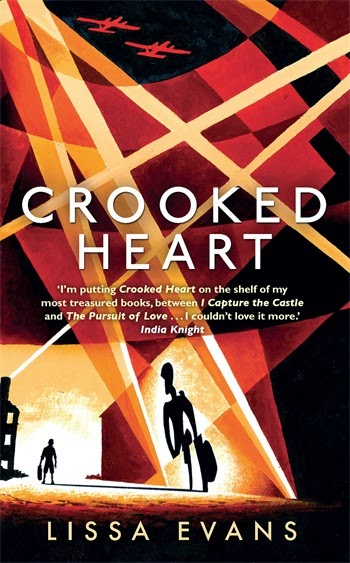 There are a lot of novels about people doing the right thing during the war, looking dashing in their uniforms, young debs suddenly flung into the secret service or the Wrens, and what have you. It's a lot less glamorous for Lissa Evans' evacuee - ten-year-old Noel Bostock who has an unglamorous name and ears like jug handles, but an extensive vocabulary.
Noel finds himself in St Albans living upstairs in a flat overlooking a scrapyard with Vee. She's thirty-six, a widow with a chubby son who works downstairs as a night watchman so it doesn't matter that she hasn't a spare bed for Noel because he can sleep in Donald's - he only needs it during the day after all.
It's a peculiar set-up, even more peculiar because of Vee's mother, who was so shocked by Vee's pregnancy at sixteen that she fainted, hitting her head, an injury that has deprived her of speech. She spends all day plugged into the wireless, writing letters to Churchill about where he's going wrong and what he ought to do next.
However Noel's life in London was also unusual, having lived from the age of four with Mattie, his godmother, an elderly former suffragette with interesting ideas about education. She had ignored the calls for Noel to be evacuated, her mind starting to go, and Noel was happy to stay as he knew she needed him. When the worst happens, Noel's fate seems to be in the lap of the gods until he winds up with Vee.
His new carer is not particularly educated - she's a bit common, to put it plainly - but has a sharp mind always darting here and there on the look out for the main chance. She's not smart enough to be very good at her get-rich quick schemes, but when Noel takes an interest the two make a winning team. The novel follows their see-sawing fortunes as the Blitz continues to wreak havoc, and Noel slowly comes to terms with his grief.
This is a wonderful book - such a breath of fresh air - about ordinary people who are also less than ordinary, and about the strange paths love can take. The plot is original and the characters quirky, shown warts and all, and running through everything, a rich vein of comedy, which would for me make this a terrific read alone.
But what makes the book even more superb is the quality of the writing. Evans has taken time over her prose and throws in just enough description to make the world of Vee and Noel come alive. Her imagery is spectacular too. Noel experiences fear 'like a cold scarf wrapped around his neck, a stomach full of tadpoles'; or how about this about a poorly-tuned wireless: 'the sound of a dance-band flared and receded, as if someone were opening and shutting a door'.
Lissa Evans has been nominated for the Orange Prize (Their Finest Hour and a Half) and other awards. I do wonder if Crooked Heart will be similarly recognised - it certainly deserves to be.