Vanessa and Her Sister by Priya Parmar 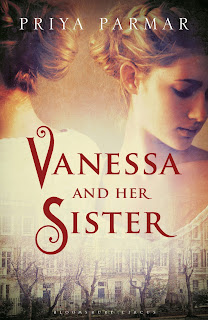 At the start of this novel about the famous Bloomsbury sisters, Virginia Woolf is said to have decreed that she was the writer, and Vanessa the painter. Priya Parmar has given Vanessa Bell a literary voice in the form of this imaginary diary - a fascinating portrait of the Bloomsbury Group, which included Lytton Strachey, Maynard Keynes, Duncan Grant, Roger Fry, Ottoline Morrell and others. It is also the portrait of the falling out that occurred between the two sisters - a story of jealousy, madness, passion and grief.
It begins in the year 1905 with the four Stephen siblings having recently moved to a house in avant-garde Bloomsbury, much to the consternation of more conservative relations. There is Vanessa, the older daughter, her brother Thoby, younger brother Adrian and mentally fragile Virginia. Vanessa justifies the move as a means to save costs - they may have to dip into their allowances if Virginia has another of her breakdowns, the last of which had led to time in hospital.
The four are a happy and well-matched bunch, the boys popping down from Cambridge having garnered a group of lively and clever friends, who soon meet at the house on Thursdays. Daringly, the sisters don't dress for dinner and are the only females in soirees that go on into the small hours. But mostly what they seem to do is talk and what a lot to talk about there is, with Impressionism giving way to Fauvism and new ideas about politics and feminism to consider.
Clive Bell is considered rather starchy by the group - this may be because he seems to be more of a red-blooded male than the other chaps - women are so formidable, perhaps it's the corsets or is the women's suffrage movement that puts the other lads off. And it seems all the women they are know are brilliantly talented in one way or other. But Bell is different, coming from hearty country gentry, and he quickly falls in love with Vanessa.
Parmar's Vanessa Bell shines as a wonderful character. She's the sensible one who sorts out the household economics and worries about her sister. As well as calm and kindly, she's interesting, with her painterly eye and sensitive observations of other characters. Unlike Virginia. She maybe the burgeoning writer of classic novels we still read today, but Virginia is desperately possessive. Her jealousy over Clive which drives a wedge through Vanessa's marriage - though to be fair, Clive is easily swayed - is pure selfishness. She wants Vanessa for herself.
Much of the book is written as Vanessa's diary, which could have given the book a somewhat halting pace. But I found myself quickly swept along, the book almost impossible to put down. Intermingled with Vanessa's diary entries are witty letters between Lytton Strachey and Leonard Woolf, a servant of the empire in Ceylon, but eventually heading home. There are also poignant letters from Roger Fry to his mother, telegrams and correspondence between the sisters and their friends.
This is a well-researched and enthralling novel, and knowing that there is so much more to tell - the book finishes in 1912 - I wonder if there is a possibility of a sequel. I certainly hope so.
Posted by Caught Up in a Book at 15:26