The Quality of Silence by Rosamund Lupton 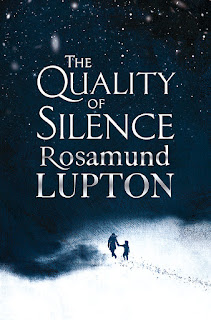 Here's a story that pits human will against one of the harshest imaginable environments, the icy wastes of Alaska in winter. Yasmin arrives with her daughter, Ruby, at Fairbanks Airport to meet up with husband Matt. He's a wildlife film-maker who has become completely besotted with the Inupiaq people who inhabit the village he has made his base, causing some friction in his marriage. The family are due to spend Christmas together, hence the girls' wintry arrival.
But Yasmin and Ruby are greeted with the news that the village of Anatue has been destroyed by fire, probably from a gas explosion, and there are no survivors. A wedding ring found with Matt's initials suggests that he is the unexplained additional victim, and a search party for him is called off. Yasmin is not convinced, as a call from Matt's satellite phone was made after the fire, although the signal died before Yasmin could hear his voice.
She decides to make the difficult journey north to find him, her daughter in tow, as there is nowhere else to leave her. Ruby is deaf and suffers separation anxiety. While this may seem a burden, it becomes a bonus as well, as Ruby sees things that others don't notice, and her sign language gives them a means to communicate in secret.
This is particularly useful because like any good thriller, there is evil afoot. Yasmin is fortunately both smart and determined as she will have to trek across a cold and wintry Alaska, half out of her mind with anxiety for Matt, while a storm is coming, allowing only a small window of opportunity to make it to the airstrip closest to Anatue.
There will be obstacles upon obstacles, with the last flight cancelled, and none of the truckers heading north wanting to take Yasmin and Ruby with them. Fortunately Yasmin is able to twist the arm of Mr Azizi, who owns his truck and isn't hampered by company rules about taking passengers. At first this looks like a blessing, but when Azizi falls ill at a truck stop, Yasmin decides to drive the truck herself. At once the story gears up a notch, as of course Yasmin has no knowledge of ice road trucking or the rules of the trucker fraternity, who turn out to be surprisingly helpful in the end. As if this isn't exciting enough, she has the feeling of being followed.
The Quality of Silence is a nail-biting read which has a lot to say about the difficulties of growing up different - Ruby is just as gutsy as her mother, which is just as well as she has a tough time at school - and also the fracking industry and the danger it poses to a fragile and once pristine environment.
The novel packs in a lot of ideas and while these are all very worthy, it does at times risk seeming a little preachy. I would have been happy if Yasmin wasn't so devastatingly beautiful that she immediately feels men are becoming obsessed with her. Call me cynical, but is the author imagining her book might be snapped up by Hollywood and her protagonist assigned to the latest glamorous A-lister? This is a small gripe but for me it detracted from an otherwise excellent novel.