The Somme Stations by Andrew Martin 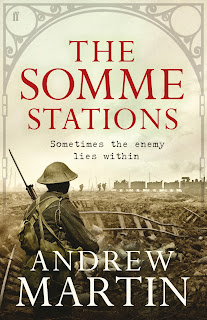 It is the autumn of 1914 and Detective Sergeant Jim Stringer is nervous, to say the least, about fighting in the war, but when a notice appears at York Station calling for men to enlist in the newly formed North Eastern Railway Battalion, he feels he must do his duty. He'll be spending a few months training in Hull with an odd assortment of 'railway pals', there'll be a few incidents highlighting the growing animosity between certain characters, and the friendliness between others.
But the reader's curiosity is truly piqued by the opening pages, told in letters from Jim's wife to a friend, that while he is recovering from a serious leg wound, Jim is to be charged with murder. The story switches back to fill in the gaps, beginning with the strange cast of characters Jim enlists with. These include the two young lads - surely they lied about their ages - Alfred Tinsley, a railway nut who doesn't get on with young William Harvey, who is mad about the army and eager to teach the Kraut a lesson or two. Oamer is the philosophical and popular NCO with a secretive private life and cheery Cockney, Bernie Dawson can't drink bitter without losing his temper. The Butler brothers include oily Oliver who is wary of Jim for reasons of his own, and the twins, beefy Roy and Andy who seem mentally deficient but are dab hands with a shovel and laying of track.
When one of the pals is murdered shortly before they are sent to France, Jim's policeman instincts kick in, but the death is written off as either accident or suicide and the men ship off. They will soon be helping set up the railway system at the Somme that will keep the artillery well supplied with shells at the front. But the military police have not let the pals off the hook for the Hull murder and this makes things a bit jittery for them, to say nothing of the horrendous reality that is the war in France.
Told through the eyes of a character we've come to know so well, The Somme Stations is a unique war story describing a little known corner of the battlefield, the role of the railways. Jim's war experiences are as evocative as any I've come across, and though in some ways it's a grim read, it is laced with his usual Yorkshire humour, a bit darker this time around. This is partly due to the array of interesting characters on offer as well as the ridiculous aspects of war that resemble a world gone mad. There is also quite a lot of alcohol consumed and contemplations of the qualities of your humble Woodbine as opposed to 'Viginian Select' cigarettes. Stringer's Chief puts in a surprise appearance and a copy of The Count of Monte Cristo has a significant role to play.
Martin has had a few literary award nominations for his Jim Stringer series, but this one won the CWA Ellis Peters Historical Award. I am hard-pressed to choose any as better than the others, I love them all, but The Somme Stations is certainly one of the more entertaining war stories I've read.