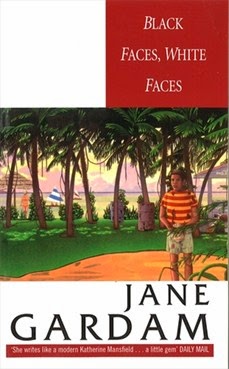 I came across this collection of short stories in a second-hand shop and what a joy! First published in 1975, Black Faces, White Faces is a book of interconnected stories about mostly English people on holiday in Jamaica. There's a law conference on, so many of the guests are lawyers, silks and even judges - and their wives - and there's a fair bit of kicking up of heels and disturbing desires that don't usually surface in the cooler English climate.
Each story follows the point of view of a character, who we may meet again from another character's point of view, and as usual there's Gardam's dry wit and gift for the telling phrase. There's a huge span in age among the guests represented here.  At one end of the scale is the young Egerton lad, whose story, 'The Best Day of My Easter Holidays', is a school exercise that sharply captures the oddity of the English on holiday in an exotic location.
Chaperoned by Jolly Jackson, their guide, the Egertons are taken on a lightning fast tour of the island, interrupted with car crashes and tropical storms. It throws up the racial unease that exists as well as the disparity between the wealthy tourists in luxury accommodation and the poorest islanders and their shanty-town existence. Of course the boy's teacher doesn't believe a word of it.
At the other end of the scale is 'Something to Tell the Girls', where two ancient school teachers go on an outing where they naively rub shoulders with the rougher Jamaican elements and are rescued in part by friendly locals but also by their inability to notice they are in trouble.
There is a honeymoon story that could be a bit Mills and Boon if it weren't for the couple's names (Boofy and Pussy!) and the droll style of the writing - particularly the appreciative comments from the old Jamaican hired to rake the sand at the hotel beach. There's a mildly creepy ghost story and a glimpse of a long-ago murder that has put a kind of hex on the beach after dark.
As usual it is the details that make people seem so ridiculous out of their usual environment - the little preoccupations with things like raffia dinner mats, and very English clothing that isn't suitable in the heat. Many characters aren't very happy, in spite of the luxury accommodation - even the gorgeous Mrs Santamarina from Bolivia, or the newly titled Lady Fletcher.
It's a collection of contrasts, with some interesting themes that are handled with great humanity and a light touch that lets the humour and irony shine through. And all the more readable for that. If there were more stories like this, I could happily read nothing but short stories and it is no surprise that this collection won prizes - the David Higham Prize for Fiction and the Winifred Holtby Memorial Prize.