Flight by Elephant by Andrew Martin 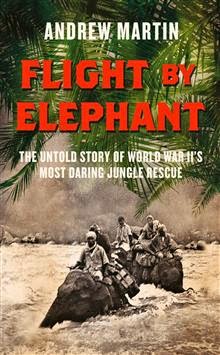 Flight by Elephant is the true account of the evacuation of around 200 refugees at the fall of Burma in 1942 to the Japanese. Burma was of course a British colony at the time when thousands of civilians working in tea plantations, on railways, in civil service positions, were forced to flee. Many escaped by boat and plane, but when airfields were under threat from Japanese bombers, those remaining had to head for the hills, literally - the rugged, jungle clad and insect infested hills of the north in an attempt to cross over to Assam in India.
One party, led by Sir John Rowland, Chief Railway Commissioner of Burma, planned an evacuation via the Chaukan Pass, infamous for being difficult with its river gorges and rugged terrain, and impossible during monsoon season, which was just about to start. Among their party were people who were neither fit nor young, including a pregnant woman, the native wife of maverick colonial administrator, Edward Rossiter, and their six-month old son.
But the book begins in the middle, with the brave struggle of two of the group, Millar and Leyden and an elephant tracker, who manage the tricky crossing of several massive rivers, one or two in full flow, and who manage to alert the need for a rescue party.
And it seems obvious to all that the man for the job is Gyles Mackrell. Mackrell is a tea planter in his fifties, but as a decorated veteran of the Royal Flying Corps, he is a tough nut and better still has experience with elephants. The story of how Mackrell organises the rescue, hampered now by a monsoon in full swing, the terrible illnesses encountered, the leeches and mosquitoes, is fascinating reading. That the last of the party were not brought out until 20th August, Mackrell disobeying orders to see the rescue out, is a testament to his determination and endurance, as well as to the mahout guides and porters that made the rescue possible.
Martin has pieced together the story from the diaries of those involved, but has also filled in many details that help it to make sense: from the political situation in Burma at the time, to the different native tribes that lived in the region, the tell-tale signs of malaria and beri-beri, the best way to deal with a plague of leeches (salt works a treat if you have it). Then there are the characters of Sir John, Rossiter, and Mackrell, et al, who are all vividly brought to life. Mackrell is the hero of the day in many respects, but thanks to his diary keeping we know of Sir John through his own words and his gung-ho, British turn of phrase - his 'Commando' advance party, for instance, are  a 'dashed stout crowd'.
I am a big fan of Andrew Martin's railway detective series of novels, so I already knew how he can make events come to life on the page with his lively, chatty prose. And he does the same here, making this tale of heroism against the odds a complete page turner. I couldn't put it down.
Posted by Caught Up in a Book at 15:49