Death on a Branch Line by Andrew Martin 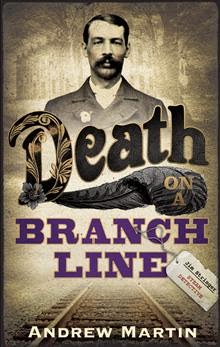 Death on a Branch Line is the fifth in Martin's Jim Stringer, railway detective series, plunging the reader into York railway station in the midst of the heatwave of 1911.  Stringer is under pressure to find a hotel for the weekend - he's promised the wife a sojourn in Scarborough - but they're all booked out. Then several incidents occur that interrupt his efforts, including the arrival of a police guard which is taking a convicted murderer to the prison where he is to be hanged the following Monday.
The condemned man, who is said to have murdered his father, makes a plea to Stringer: to visit his family home and prevent another death - his brother's. So instead of Scarborough, Jim takes Mrs Stringer to the tiny village of Adenwold, where half the population is on an outing to the seaside, and there's the feel of a deserted Western town awaiting a showdown.
In a race against time, Jim tries to find out if there are any other motives for the murder of local landowner, Sir George Lambert, a vigorous hunter and shooter, who didn't get on with either of his two sons. Was Sir George's relationship with the condemned man's governess an important factor? And who are the two men that John Lambert fears so much and what can be the significance of all those railway timetables he's got in his cottage?
Among the characters that invite the reader's curiosity are the oddball station master who is immersed in a table-top recreation of a Sudanese battle; the cheeky, layabout signalman and the Handley family who run the Angel, the inn where the Stringers spend the weekend.  The landlord is unhappy because he isn't making enough money and he'd rather be a farmer; his wife is upset over the impending execution of Hugh Lambert and their son Mervyn is particularly taciturn for reasons we will only learn about later on.
Death on a Branch Line doesn't have Stringer charging about the countryside, jumping on and off trains and dodging villains as in previous books I've read in the series. But that doesn't mean it's slow. There is the constant tension of time ticking away until Hugh Lambert's final morning which is oddly contrasted with the heavy midsummer feeling of a town where nothing happens.
The novel is also leavened with dollops of North of England humour which is largely due to the dry tone of Stringer's narration and his constant little battles to prove his worth to his Chief, a cigar smoking veteran soldier who is oddly spry considering his age and shape. Mrs Stringer gets plenty of opportunity to add her views, particularly to do with women's rights and in the background there is the sense of the approaching war. It's a light, fun read on the one hand, but the book is all the more interesting for the way it conjures up a very believable feel for its time and place.