The Liar's Daughter by Laurie Graham 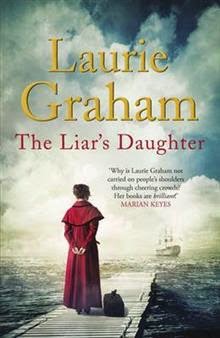 Laurie Graham's latest novel whets the reader's curiosity about Admiral Nelson's relationship with Mrs Hamilton, and their daughter, Horatia Thompson. But we learn about it only obliquely, through Nan Prunty McKeever, the liar's daughter of the title.
Nan has been brought up to believe she is Horatio Nelson's daughter, the product of a fling on board the Victory not long before Nelson's famous Battle of Trafalgar - the battle Nelson won so decisively for England, while losing his life. How her mother, Ruby, came to be on board may seem hard to believe, but dressed as a boy, and apprenticed to a sail-maker, it could just about be possible.
On the other hand, while bringing Nan up in Portsmouth and running an alehouse, Ruby tends to drink too much and tell stories, which get more elaborate as she goes on. The truth is anyone's guess.
When Ruby drinks away the profits, Nan's future looks more and more tenuous but fortunately she is rescued by a benevolent teacher, and eventually gains work in a dispensary. Here she meets and marries a doctor, and has the chance to start a family of her own. But she can never let go of the fact that she might be Nelson's daughter.
The novel tracks Nan's attempts to trace the story around her birth, visiting the Greenwich home for retired sailors where she interviews veterans who served on the Victory, and meeting Mrs Horatia Ward - Nelson and Emma Hamilton's actual daughter who would rather not acknowledge the fact. The irony of this is just a part of the rich vein of humour that runs through the book, mainly due to the brilliant characterisation and 'tell it like it is' narration.
And Graham has obviously done a load of research too, because she recreates the atmosphere of the time, the events at Trafalgar, diseases and changing medical treatments, and the years that pass through to the middle 1800s. Soon another war takes place, a war that will involve Nan's daughter, Pru, a determined and sensible young woman who joins a nursing contingent heading for the Crimea. The conditions here are described in all their grisly glory, but there is still a lot of very human drama, and the friendships she makes lead to plenty of banter and comical moments.
Graham makes some interesting digs at the more refined nurses connected with Florence Nightingale and Pru's Crimea sojourn makes what appears to be an interesting diversion from the main thrust of the story - the parentage of Nan. And a welcome diversion it is, as Nan's obsession can make her look ridiculous at times. But with a clever twist of plotting, the two story threads come together in a very satisfying ending.