The Poets' Wives by David Park 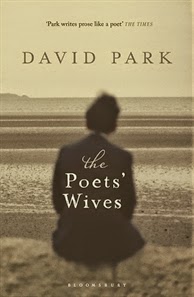 David Park's new novel concerns the lives of three poet's wives, two of which are real and one fictitious. But all three share a few similarities, the most obvious of all is that their lives have been to some extent subordinated to the work of their husbands' genius.
The first story is that of Catherine Blake, wife of the early Romantic and visionary poet and artist, William Blake, whose talent like many of his kind, was not recognised in his lifetime. Catherine is from humble origins, in fact she is illiterate when she marries William, but theirs is such a close relationship that she becomes his invaluable assistant, helping with the colouring of his dreamlike illustrations.
The relationship is marked by tragedy when their daughter is stillborn, there are financial difficulties, and society regards Blake as mad, but through all this Catherine is loyal. Ahead of his time, Blake dabbled in new ideas which weren't always Catherine's cup of tea, such as free love, nudism and pacifism.
Next we read about Nadezhda Mandelstam at the time her well-regarded poet husband, Osip, has been incarcerated by Stalin for a defamatory poem against the dictator. She speaks not only as the wife of a poet, but also as one of many whose loved-ones are victims of Stalin's purges, and her story paints a grim picture of the fear these people endured decade after decade, waiting for a hammering at the door in the night. It is this terror that meant neighbour could not trust neighbour, and where children were encouraged to inform agains their parents.
After Osip dies, Nadezhda becomes a living custodian of his poetry, too afraid to keep written copies hidden or with friends. Instead she learns the poems by heart, waiting for twenty odd years before Osip's name is cleared and it becomes safe to reveal them.
Oddly enough, in a truth is stranger than fiction kind of way, it is the third story that seems more ordinary, though still powerful. In Northern Belfast, Lydia is preparing for the scattering of her husband Don's ashes into the sea near the cottage where he wrote his poetry. Her daughters visit to help her, and the three women remember the countless ways in which Don had let them down.
In the background is the tragedy of Lydia's son, who died following an accident in Morocco, a death she has never really come to terms with. Somehow, Don's poetry always seems to have come first in their lives - even when it came to grieving for her son.
These are all very moving stories and each one is told through the eyes of the three wives using very different voices. The author brilliantly crafts characters in an intensely personal way that makes them believable and enormously sympathetic.
Park couldn't have imagined more extraordinary lives to write about than those of Catherine Blake and Nadezhda Mandelstam, but he also has captured the poetic thinking of their husbands in a way that makes these stories very lyrical and at times hauntingly beautiful. The story of Lydia is easier to relate to, with its modern day setting, and yet the themes are so similar, and as such this story helps you better understand the earlier stories. It all adds up to a very thought-provoking and enriching reading experience.