Return to Fourwinds by Elisabeth Gifford 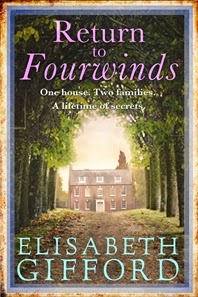 I was impressed with Gifford's debut novel, Secrets of the Sea House, and was soon happily ensconced in this story about two families across two generations. It's another book about secrets - how we love those - and begins when the Donoghues and the Colchesters get together at the Colchester's home, Fourwinds, to celebrate the marriage of their children, Sarah and Nicky.
There's a bit of a difference in class between the two families, so it's fortunate that Sarah and Nicky are so devoted to each other, and we are in the late twentieth century after all. Soon you learn that Alice Colchester's family briefly cared for Peter Donoghue as an evacuee during the war, but this fascinating tidbit is quickly put aside when Sarah suddenly loses her voice and does a bunk days before the wedding.
If that isn't enough to get you interested, the plot sweeps you back fifty years to Ralph Colchester's childhood in Valencia, in the early 1930s, on the eve of the Spanish Civil War. Young Ralph misses his father, who has fallen out with his mother and taken up an engineering job in South America. Left with scarcely a bean to support herself and Ralph, Lily has found a home for them with English banker, Max Gardiner, working as his 'housekeeper'. Mr Gardiner is kindly to Ralph, and the three socialise with other emigres, while Spain shimmers in the heat and there's a wonderful exotic sensuality about it all.
I would have been quite happy with just Ralph's story - there is such a lot to explore with his peculiar family arrangement and the political situation in the background. But all at once it's the war (the big one) and we meet Peter, growing up in poverty in Manchester, with a tubercular mother and a drunken Irishman for a father. When he and his brother are evacuated to the countryside, Peter is taken in by the Hanbury family and is given a glimpse of another life, one full of music and learning and plentiful rations.
While Return to Fourwinds is certainly engrossing, there is maybe a little too much going on, as we have to catch up with Alice's story and later Patricia who meets Peter after the war when he goes to London to study divinity. And of course the novel is switching forward in time to tell us where Sarah gets to, and how Nicky and parents are coping at Fourwinds.
We chug along, filling in gaps for all these characters, until finally towards the end, there are a couple of bombshells and some fascinating stuff about what people like Max Gardiner were really doing in Madrid during the war. There is so much to like about Return to Fourwinds - Gifford is an accomplished stylist, and she has done her research to create an interesting scenario. However I can't help feeling that maybe just one big secret would have sufficed.