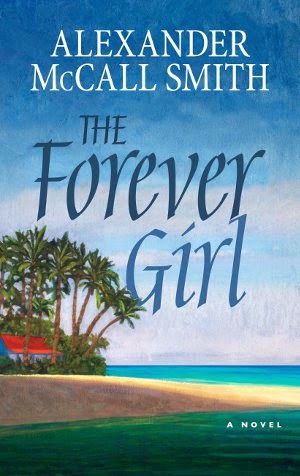 The Forever Girl deals with unrequited love, an aching longing in the heart of its main character, Clover, which begins when she is around six years old. The story takes place on the Caribbean island of Grand Cayman among the expat families who make comfortable livings in banking and property development. Clover's father, David, is Scottish, a banker who works long hours, while her expat American mother, Amanda, plays a lot of tennis and swims in their pool. Their Jamaican housekeeper, Margaret, looks after the house and takes Clover and her brother to school.
This might make the lives of Clover's parents seem rather shallow, but McCall Smith is better than that. He doesn't take cheap shots at accountants or people with more money than they know what to do with. He is empathetic towards Amanda, who feels neglected by her hard working husband and has a brain she doesn't get to use. Her brief dalliance with another man is treated sensitively and with understanding.
And all the while Clover is growing up, her childhood friendship with James evolving into a crush she doesn't know how to handle, just at an age when James would rather play with other boys. Amanda sympathises and sensibly tells Clover she will grow out of it and to move on. The shift to boarding school in Scotland will surely settle the matter, but through her secondary school years and even when she goes off to university in Edinburgh, there is a lingering sadness about Clover.
While she makes friends easily and develops a relationship with another student, this sadness seems to put a wall around her - you feel she can never be really close to anyone else. And it shapes her decision making as well, causing her to do embarrassingly awful things, making up stories and even following the object of her affections, just so she can get that little bit closer to James.
A plot like this could have turned this into a truly dreadful sort of book, unless leavened with slapstick comedy, a la Bridget Jones, which The Forever Girl is anything but. What rescues it is the wonderful wisdom that McCall Smith throws in and the fact that Clover is oddly likeable. The subplot around Amanda is interesting, and the portrayal of a marriage in difficulty sensitively done. And then there is the expat world of Cayman Island - languid and hot, and full of discontent. It is the perfect setting for unrequited love to begin, and contrasts brilliantly with the more serious yet creative city of Edinburgh. A sojourn in Australia livens things up towards the end.
McCall Smith is always a breath of fresh air with his originality of storyline and the philosophical musings that come through his writing. While the story is still entertaining, you reach the end of The Forever Girl feeling a little wiser - surely the best reason for reading fiction.