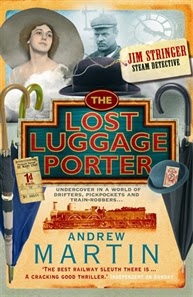 I don't often pick up mystery novels involving organised crime or gangs of thieves, but I felt happy to make an exception with the third Jim Stringer railway detective novel by Andrew Martin. I knew I wouldn't be disappointed and I was right.
Martin throws Jim in at the deep end when he turns up for his first day as a detective, having lost his one chance at his dream job as an engine driver because of a terrible blunder that wasn't his fault.   Lydia, 'the wife', is pleased about this as she is smart and she knows Jim has a good brain and thinks he should use it. She is ambitious and modern, a working woman in her own right and pregnant with their first child.
But back to Jim's first day. Instead of getting to know the rest of the team of York railway police, Chief Inspector Weatherill, a large, messy looking cigar smoker, sends Jim off to buy a scruffy suit so he can go undercover. His brief is to ferret out criminals involved in a spate of burglaries at the station.
Jim buys a tired old suit from a second hand dealer, as well as a pair of spectacles, and promptly pushes out the lenses. He plonks the glasses on and his disguise is complete. Which is just as well, because an incident the previous day, has shown Jim just where he can begin. This involved the lost luggage porter of the title, a pale, sickly creature named Lund. It was Lund who not only produced Jim's missing railway magazines, but alerted Jim to a pickpocketing duo he referred to as the Brains and the Blocker.
Perhaps it should have been Lund who joined the detective ranks, as Lund also tells Jim the pub, the euphemistically named Garden Gate, where he would find them. Jim declares his eagerness to join the gang, and after proving himself as a willing if not skilful pickpocket is soon taken on.
But Jim hasn't bargained on the ruthless nature of the gang's leader, one Valentine Sampson, who has boasted of killing two policemen. When the gang pulls off a heist at York station after dark, a piece of action that involves some shooting and two potential casualties, Jim is hauled off to Paris with the Brains and Sampson. It seems likely that one of the gang has betrayed them, and Jim is put on watch.
How Jim attempts to make his escape and return home makes for some entertaining reading, and the story rollicks along nicely. But what makes this book work so well is the way Martin builds up his characters, Jim's perky narration, the smart dialogue laced with humour and the period detail which makes you really feel you are in a railway station in the north of England, circa 1905. It is all of this that makes the series such an absorbing read and utterly original.
Posted by Caught Up in a Book at 15:25