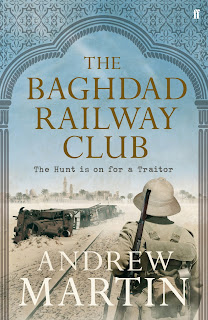 In this instalment of Andrew Martin's Jim Stringer mystery series, our dogged railway detective finds himself sent to Baghdad to investigate a potential case of treason. It is 1917 and Jim has barely recovered from an injury in the Somme when a chance meeting at a railway club in London plus a word from his Chief in York have him working on a covert mission.
Not terribly good in hot weather, Jim is flung into a scorching Mesopotamia, where the Allies have chased out the Turks. The local population is unsure whether the British are any better and insurrection simmers in the background.
It is easy to forget that there was more to World War One than the Western Front and of course Gallipoli. But the fall of the Ottoman Empire is not to be sniffed at. Jim's meant to reconnoitre with a Captain Boyd outside the tea shop at the railway station but discovers the poor chap's corpse instead. Jim slips away, anxious not to be in the frame for his murder and is soon on the hunt for suspects.
The one with the most likely motive is Lt. Col Shepherd, the officer who has taken Jim on to help run the railways - a debonair, old-school-tie sort with a tendency to be a risk taker in battle. Shepherd was the officer mentioned by Boyd to the War Office as a possible traitor, for apparently accepting a bribe from the surrendering Turks. There's also Boyd's nervous batman to consider who is acting somewhat secretively. Other characters add colour - movie maker, Wallace King, who turns up at the most inconvenient of times with his film camera and the breathtakingly lovely archaeologist, Harriet Bailey, who is an expert on the Arab peoples.
Jim begins to feel nervous when Shepherd and his side-kick Captain Stevens are eager to take him on a steam train outing up to Samarrah, Jim driving and Stevens as fire-man. Normally this would be a joy, but the intense heat and also the knowledge that Jim's cover is blown give Jim a sense of impending doom.
The tension ramps up a notch or two with more deaths, and there's Martin's usual blunt North of England humour which describes the characters so well. The tedium of talks given at the railway club meetings, the love-lorn folly generated by the presence of a pretty woman, the reluctant help given by Jim's Arab servant, the ridiculous code devised by Jim's secret service boss that is really no help to Jim at all - all give the reader plenty of chuckles. Meanwhile the plot is driven towards a stand-off during another railway outing, while a surprise twist courtesy of Jim's wife Lydia rounds the book off nicely.
The Baghdad Railway Club delivers more of what fans of the Jim Stringer series have come to expect - who new that steam railway systems could be such fun? There are only two I have yet to read, but perhaps Martin will get the railway bug again and deliver a few more.