The Ends of the Earth by Robert Goddard 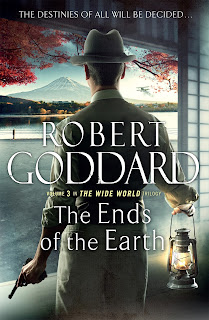 The Ends of the Earth is the final instalment in Robert Goddard's trilogy featuring James 'Max' Maxted, an ex-World War One flying ace, out to avenge the murder of his father in 1919. If you remember, Max had planned to settle back into civilian life after the war, opening his flying school with his old flight mechanic mate Sam Twentyman, but fate intervenes when his father falls from a rooftop in Paris. Did he fall or was he pushed?
Diplomatic secrets were hot property in Paris while heads of state thrashed out what would soon be The Treaty of Versailles and it seemed Pop knew a few compromising facts that would hamper, among others, Fritz Lemmer an old spy for the Kaiser, now on the hunt for new business, and rising man of the moment in Japan, the nasty Count Tomura.
The previous two books had Max investigating just what his father knew that sealed his fate, first in Paris and then in London, where he became recruited by Secret Service maestro, Horace Appleby, to do a job or two for him. There are further interesting characters related to an American trader in information named Travers Ireton, who doesn't make it past the first round, but his secretary extraordinaire, Malory Hollander, and tough-guy assistant, Schools Morahan become key personnel. These two, plus Max and Sam are the core team, rather like characters from Mission Impossible - each with their particular skills and connections.
The second novel in the series, The Corners of the Globe, left us with one of those terrible cliffhangers and the message no reader wants from a thriller: 'to be continued'. With Max presumed dead in a villa on the Riviera, it has been a year of anguish to find out if there was a chance he might have survived to join his team-mates in their pledge to finish off the job old Sir Henry Maxted had begun -- whatever that was.
The Ends of the Earth begins with Schools, Malory and Sam, plus a team of shady hired hands to assist Max in his quest. They are waiting for Max in Yokohama, it is a sultry July, and everyone's patience is wearing thin. I won't give the game away with what really happened to Max. Suffice it to say, there is a ton of action and intrigue, both in France and Switzerland, where Appleby hatches a small plot of his own to nobble Lemmer, and a string of action set pieces that threaten the lives of our intrepid heroes in Japan. It all builds up to an amazing scene in Zangai-jo - the imposing fortress-like castle of Count Tomura.
The James Maxted trilogy is pure escapism, but classy escapism in the tradition of John Buchan and while the characters, though many and varied, are perhaps not particularly well-developed, the writing is superb. On top of all this is Goddard's fabulous recreation of interesting settings in the period just after the First World War.  I would be happy to see the team back for more page-turning adventures, but concede that a trilogy is a trilogy. Fortunately this author has a well respected back-list for me to turn to, so I guess I'll just have to be happy with that.