The Lie by Helen Dunmore 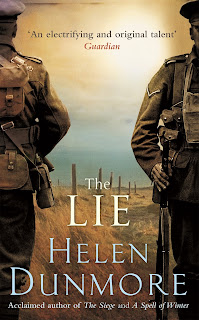 From the beginning there is a sense of impending doom as you read The Lie, but for some reason this didn't put me off, the writing is so vivid and engaging.
Written from the viewpoint of Daniel who, recently returned from the trenches, has nowhere to go and no family. At a little over twenty and clearly war-damaged, he repeatedly sees the ghost of his old friend, Frederick, and can still smell the foul stench of no man's land.
In the cities, unemployed ex-servicemen stand on street corners selling cigarettes or begging, so Daniel returns to the town where he grew up. He finds himself helping out Mary Pascoe, an old woman who lives on the edge of their Cornish village, making a living by grazing a goat, keeping chickens and growing vegetables on her small holding.
Both Daniel and Mary Pascoe have something in common in that neither are very popular with the villagers. Mary has been seen as something of a witch. Daniel was a gifted scholar, but having had to leave school at eleven to support his ill mother, has developed a chip on his shoulder. Being best friends with the wealthy children his mother cared for hasn't helped either.
Virtually blind and very frail, Mary Pascoe is glad of Daniel's help and promises him her property when she dies, but insists that when the time comes, her grave will be on her land rather than in the village cemetery. Daniel goes along with her wishes, and it's not long before he has buried her on the edge of her field, something he and the reader both know he should never have done and so begins the lie of the title.
Daniel finds himself telling Felicia, Frederick's sister, that Mary Pascoe can't receive visitors because she's poorly. He visits Felicia at the large house she has inherited - the house where she and Frederick first got to know Daniel. It was a taste of the good life for Daniel, but more importantly, was the start of an intense friendship between Frederick and Daniel, a friendship that carried them through years of separation when Frederick was sent off to boarding school.
The story revolves around Daniel's lie, while he continues to work Mary Pascoe's land and reacquaints himself with Felicia. Woven through this are the events that made up Daniel's war, where he becomes part of a close-knit unit of men, just one of the lads for the first time in his life. When Frederick turns up as an officer though, new tensions arise.
Helen Dunmore has written a fine, spare and moving portrait of the effects of war on a young and sensitive man. The characters of Daniel, Frederick and Felicia vividly come off the page and are unique and interesting, their relationships with each other complex and delicately drawn. The gradual build-up of drama makes the book hard to put down. Among all the recent World War One fiction it is easy to overlook this slim volume, but The Lie is one novel that particularly deserves to be read.
Posted by Caught Up in a Book at 23:36